Scientific Name: Graptemys geographica
Taxonomy Group: Reptiles
COSEWIC Range: Ontario, Quebec
COSEWIC Assessment Date and Status Change: November 2012
COSEWIC Status: Special Concern
COSEWIC Status Criteria:
COSEWIC Reason for Designation: There have been no quantitative, long-term studies of this species in Canada and, therefore, there is limited evidence of recent declines, range contraction or local extirpation of the species. However, the species’ long-lived life history with delayed age of maturity and the potential threats to its habitat suggest that it is susceptible to population decline. Significant threats include direct mortality from collisions with motor boats and from commercial fisheries bycatch.  Loss and degradation of shoreline habitat is another threat because this wary turtle is readily disturbed by human activity and boating, and shoreline developments interfere with the species’ basking and nesting behaviour. Unnaturally high predation of nests by mammalian predators, especially raccoons, is another threat. If not ameliorated, these threats combined with the species’ life history will cause the species to become Threatened in Canada.
COSEWIC History of Status Designation: Designated Special Concern in May 2002. Status re-examined and confirmed in November 2012.
SARA Status: Schedule 1, Special Concern
Date of Listing (yyyy-mm-dd): 2005-01-12 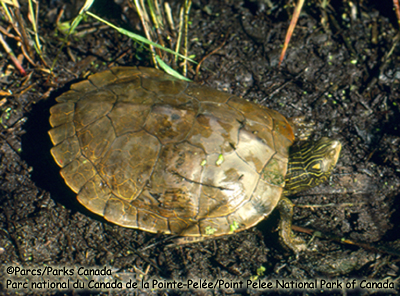 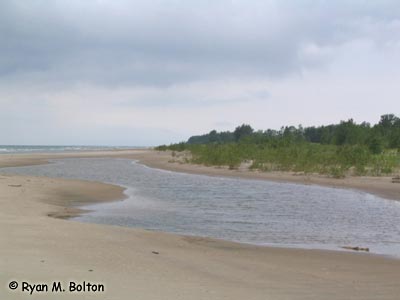 The Northern Map Turtle is a highly aquatic, wary turtle, so it is often difficult to get a good look at it. The carapace (shell on the turtle’s back) is olive to brownish in colour, with a net-like pattern of light yellow lines that fade as the turtle matures. When the species was first described, the markings were thought to resemble a geographical map, which gave rise to the turtle’s common and scientific names. The head, neck, and limbs are a dark olive green with longitudinal greenish-yellow stripes and a roughly triangular spot behind each eye. Females are much larger than males, often weighing five times as much. The female’s carapace may be more than 25 cm long, while the average carapace length for males is only 14 cm. Juveniles are similar to adults, but the shell is more round for the first one to two years of life.

The Northern Map Turtle occurs throughout the northeastern United States. It reaches its northern limit in southern Ontario and southwestern Quebec, where it is associated with the Great Lakes Basin and the St. Lawrence River. It is not known whether population levels are increasing, decreasing, or stable because there are no programs monitoring the status of the Northern Map Turtle in Canada. Estimates of 15 to 35 turtles per kilometre of shoreline have been made along the Ottawa River, and for localized Quebec populations (Lac des Deux Montagnes and Norway Bay).

The Northern Map Turtle inhabits both lakes and rivers, showing a preference for slow moving currents, muddy bottoms, and abundant aquatic vegetation. These turtles need suitable basking sites (such as rocks and logs) and exposure to the sun for at least part of the day.

The Northern Map Turtle is an extremely wary species, diving into the water from basking sites at the slightest provocation. Individuals rarely leave the water except during nesting. They are nocturnal (active at night) to slightly crepuscular (active at dawn and dusk), remaining asleep in the sunshine for most of the day. They feed primarily on mussels, although they will occasionally eat other things. Hibernation is a communal activity, with turtles congregating in deep water areas with a slow current. Mating occurs while turtles are still at the hibernating site (October to April). Sometime in June or July, females may move a considerable distance inland to lay their eggs in clutches of 10 to 16. The hatchlings emerge in late August or early September.

The Northern Map Turtle’s distribution coincides with the most densely populated and industrialized areas of Ontario and Quebec. As a result, numerous factors threaten its survival. Loss of habitat and use of waterways for recreation are perhaps the greatest significant threats to this species. The control of water levels, particularly with dams, may adversely affect the turtles by submerging nesting sites and altering habitat. The diet of the Northern Map Turtle makes it vulnerable to accumulation of heavy metals and other toxins. Wildlife trade (for food or as pets) is an additional threat to this turtle, which resembles other highly desirable species.

The Northern Map Turtle is a “specially protected” species under Ontario’s Fish and Wildlife Conservation Act, which protects it from being hunted, trapped, held in captivity, or traded without a licence. The turtle has no legal status in Quebec, but its nests are protected from disturbance, destruction, or alteration by the Act respecting the conservation and development of wildlife; and the collection, keeping, and trade of individuals is prohibited by the Animals in Captivity Regulation.