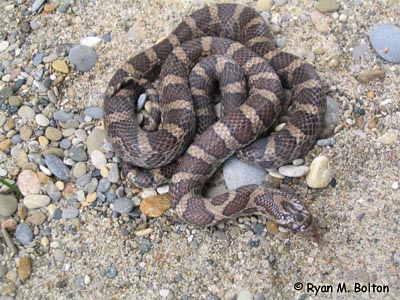 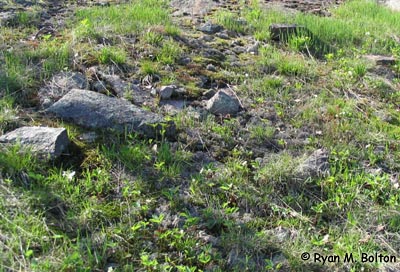 There are 25 subspecies of the Milksnake found in North America. Only one subspecies, the Eastern Milksnake, has a distribution that extends northward into Canada.

The Eastern Milksnake, Lampropeltis triangulum is tan, brown or grey and has large, black-outlined, red or brown dorsal blotches that fade as the snake ages. The maximum total length recorded for this species is 132 cm, although normal lengths range from 60-90 cm. The Eastern Milksnake is often found in barns and stables where it readily finds small mammals, its predominant prey. (Updated 2017/06/06)

The global range of the Eastern Milksnake is confined to southeastern Canada and eastern U.S. In Canada, the Eastern Milksnake is mostly found in the Great Lakes / St. Lawrence and Carolinian regions within southern and central Ontario and southwestern Quebec. In Ontario, the Milksnake ranges from southwestern Ontario to Lake Nipissing, and in Quebec, the species occurs mostly within the Outaouais, Montérégie and Montréal regions. Although the species is widespread, there is evidence that Eastern Milksnake localities have been lost from large urban centres and regions with intensive agriculture. (Updated 2017/06/06)

In Canada, Eastern Milksnakes emerge from hibernacula in early spring (April-May), when the mating season begins. Mating may last several weeks. In early summer, a clutch of approximately 10 eggs is laid in rotting logs, under boards, or in other substrate with suitable cover. Hatchlings emerge from August to September. When threatened, the Eastern Milksnake will often mimic a rattlesnake by vibrating its tail against the substrate or surrounding vegetation, but unlike rattlesnakes, Eastern Milksnakes are not venomous and are harmless to humans. (Updated 2017/06/06)

Major threats to the persistence of the Eastern Milksnake in Canada are habitat loss from the expansion of urban and cultivated areas, road mortality, intentional killing, collection for the pet trade, and unnaturally high mortality from pets and other predators. (Updated 2017/06/06)

Summary of Research/Monitoring Public surveys and video taping are being used to analyze whether recently erected signs are having a positive effect on drivers by alerting them to the need for caution to avoid running over snakes crossing the road. Summary of Recovery Activities Alderville First Nations is promoting conservation of tallgrass prairie habitat by displaying information on species at risk occurring in tallgrass prairie habitat, hosting audio/visual presentations, and speaking with local residents, schools, and interest groups. Site inspections also are underway to educate private property owners about tallgrass prairie habitat and species at risk like the Milksnake. Posters developed by the Toronto Zoo and education programs such as the Georgian Bay Reptile Awareness Program help educate the public on snakes. URLs Ontario’s Biodiversity: Species at Risk:http://www.rom.on.ca/ontario/risk.php?doc_type=fact&lang=&id=291