Scientific Name: Tegeticula yuccasella
Taxonomy Group: Arthropods
COSEWIC Range: Alberta
COSEWIC Assessment Date and Status Change: May 2013
COSEWIC Status: Endangered
COSEWIC Status Criteria: B1ab(iii)+2ab(iii)
COSEWIC Reason for Designation: Only two populations of the Yucca Moth are known from an extremely small and restricted area. This moth species has an obligate mutualistic relationship with Soapweed; Yucca Moth is the sole pollinator of Soapweed and its larvae depend on Soapweed seeds as a food source. One population may not be sustainable as it persists with human intervention that prevents severe herbivory of the flowers, fruits and stalks by wild ungulates. The Non-pollinating Yucca Moth larvae consume Soapweed seeds and compete with Yucca Moth for food. The loss of flowers or seeds as a result of ungulate herbivory is an ongoing threat, while in the long term Soapweed populations may be limited by the lack of fire and other disturbances that provide sites for the establishment of seedlings.
COSEWIC History of Status Designation: Designated Endangered in May 2002. Status re-examined and confirmed in May 2013.
SARA Status: Schedule 1, Endangered
Date of Listing (yyyy-mm-dd): 2005-01-12 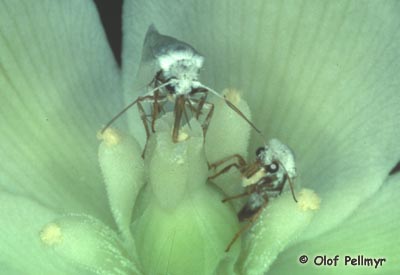 The name Yucca Moth is used here to refer to the species Tegeticula yuccasella, whereas elsewhere it may be used to refer to a larger group of species that exhibit similar life history and behaviour.

The Yucca Moth is a relatively small, slender-winged brown moth with a whitish head. It has a wingspan of 18 to 28 mm, and females are slightly larger than males. The early developmental stages of the moth (the larvae, or caterpillars), are found inside Yucca flowers (also known as Soapweed), where they feed on developing seeds. They are small, white, and grub-like, turning pink to dark red with age.

The Yucca Moth is found in populations of Yucca plants throughout the Great Plains from southern Texas to southern Canada and in all regions east of the plains northward to Michigan and Connecticut. The moth reaches the northern extent of its distribution in Canada, where two Soapweed populations exist in Alberta – one on the Lost River and one on the Milk River. There is a huge fluctuation in the number of Yucca Moths in Alberta, both within and among years. Without long-term data it is difficult to determine if there are enough individuals to sustain the species over the long term. The moth population on the Lost River occurs in densities similar to those of moths in populations further south. However, moths are notably absent from the Soapweed plant population on the Milk River, and the plants there have not produced any seeds for at least five years.

The host plant, and therefore the moth, is restricted to well-drained, mostly south-facing slopes. These slopes characteristically also have sparse populations of prickly pear cactus and Sagebrush.

The Yucca Moth and the Soapweed plant have an interesting relationship that is necessary to both of them. Moth larvae feed only on Soapweed seeds, and in turn the Soapweed is only able to produce seeds if the plant is pollinated by Yucca Moths. Most moths emerge from the soil between mid-June and mid-July. They become active shortly after sunset and fly between Soapweed plants in search of recently opened flowers, where they congregate and mate. The females actively collect pollen from one plant and then usually fly to another flower. After arriving at the new flower the female inserts an egg next to the developing ovules (future seeds of the plant). The moth then climbs to the tip of the flower, ensuring the transfer of pollen. The moths do not feed as adults, and they die after three to five days. The eggs hatch in 7 to 10 days, and the larvae feed on the developing seeds. After 50 to 60 days the larvae chew their way out of the fruit and drop to the ground on a silken thread. The larvae burrow from 5 to 20 cm into the soil and enter a dormant state, emerging as adults at least one year later. If conditions are unsuitable, larvae can remain dormant for several years, but mortality rates increase with extended dormancy.

Scientists believe that in Canada, threats to the survival of the moth are mainly related to its northerly distribution. At the northern edge of its range, the moth, or its host plant, is likely limited by temperature. The isolation (by at least 200 km) of the Alberta populations from other populations in the main range means that the moths would probably not be able to recolonize the Soapweed plants if the local population was wiped out by a chance event, or a series of climatically unfavourable years. Other threats that are not related to latitude include feeding by other insects as well as wild Mule Deer and Pronghorn on Soapweed flowers and fruit, habitat alteration, and the collection of plants for horticultural purposes.

Summary of Progress to Date A provincial recovery action plan has been developed and implementation underway. Recovery actions aim to develop a multi-species habitat conservation strategy and prioritize habitat stewardship activities within the Milk River Drainage Basin in southern Alberta. Summary of Research/Monitoring Activities Population monitoring is taking place in collaboration with other planned recovery activities. Summary of Recovery Activities Yucca Moth populations are being translocated from sites with successfully fruiting Soapweed plants to the site where the plants are not reproducing successfully. Translocation helps to maintain the interdependent relationship of Soapweed and the Yucca Moth and to prevent the extirpation of the species. Management of industrial and agricultural impacts is taking place. Recovery actions will include collaboration with university graduate student research projects. URLs MULTISAR: The Milk River Basin Project:http://www3.gov.ab.ca/srd/fw/speciesatrisk/pdf/SAR_87.pdf