Scientific Name: Oncorhynchus kisutch
Taxonomy Group: Fishes
COSEWIC Range: British Columbia, Pacific Ocean
COSEWIC Assessment Date and Status Change: November 2016
COSEWIC Status: Threatened
COSEWIC Status Criteria: A4cde
COSEWIC Reason for Designation: This population experienced declines in excess of 60% in the number of mature individuals in the 1990s because of a reduction in marine survival, changes in freshwater habitats, and overexploitation, which resulted in a designation of Endangered in 2002. The population increased in abundance from 2005 to 2012 but escapement in 2014 and 2015 was very low. Marine survival rate has deteriorated. There are a number of threats to the freshwater habitat related to invasive species, drought, increased water temperatures, land use, and increased urbanization. All of these factors are suspected to cause reductions in numbers exceeding 30% over three generations including years in the recent past and the future.
COSEWIC History of Status Designation: Designated Endangered in May 2002. Status re-examined and designated Threatened in November 2016.
SARA Status: No schedule, No Status
Date of Listing (yyyy-mm-dd): 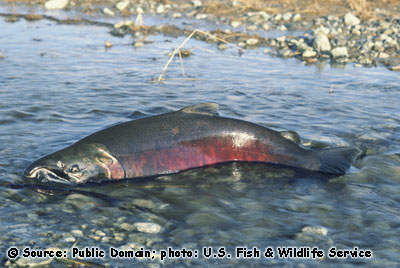 The Coho Salmon currently living in the interior Fraser watershed are genetically distinct. They can be separated from salmon in other areas of Canada, including those in the lower Fraser River watershed. The Fraser River Canyon is a natural boundary that separates many fish populations, and the salmon in the upper Columbia watershed, which may have been most closely related to those in the Interior Fraser population, are now extinct. The Coho Salmon Interior Fraser population is of national significance, and is made up of at least five sub-populations. [Updated 22/01/2018]

Coho Salmon are widespread throughout the Thompson River, the largest watershed in the Fraser River system. Their distribution in non-Thompson tributaries of the interior Fraser system is not well known. Coho Salmon from the interior Fraser River watershed migrate extensively in the ocean and have been recovered in fisheries from Alaska to Oregon, but most were caught off the West Coast of Vancouver Island and in the Strait of Georgia. The number of spawning Coho Salmon in the North and South Thompson watershed peaked in the mid-1980s, declined rapidly until about 1996, and has perhaps been stable or increasing since then. The proportion of adults caught in fisheries averaged 68% until 1996. In response to conservation concerns, exploitation was reduced to about 40% in 1997 and averaged 6.5% the next three years. Counts made between 1998 and 2000 reveal that slightly more than half of the total estimated population of 24 000 occur within the North and South Thompson watersheds. Productivity has declined to the point where many local populations are not replacing themselves — even with the major reductions in fishing impacts. Recent marine survivals have been 3% or less, much lower than during the 1970s and 1980s. Annual returns (catch + spawning escapement) averaged 161,000 without trend between 1985-1993. Returns then declined sharply and averaged 37,000 with little trend in the period 1994-2012. Escapement varied around 60,000 from 1985-1989, then declined to a low of 16,000 in 1997. This was followed by an increase to 39,000 in 2001, then another decline to 15,000 in 2005. Escapement increased again to 41,000 in 2012, but declined in the last 2 years reaching 21,000 in 2014. Marine survival of smolts to returning adults continues to be low averaging less than 5% during the past decade, much lower than around 15% during the 1970s and 1980s. The most recent values of marine survival were the lowest seen reaching 0.1% in 2014. [Updated 22/01/2018]

The distribution of spawning habitat for Coho Salmon is usually clumped within watersheds. Juveniles tend to cluster in areas of suitable habitat in shallow gradient streams and occasionally lakes. Much of the interior Fraser watershed where Coho Salmon are found has been impacted through logging and other human disturbances and is now used for a variety of agricultural activities. Juvenile Coho Salmon migrate down the Fraser River and spend some time in the highly developed Fraser estuary. The majority of their oceanic residence is typically spent near the coast in southern BC. The marine areas used by Interior Fraser Coho have been affected by climate-related changes that have impacted productivity and reduced the survival rate of Coho Salmon in southern BC during the last two decades. [Updated 22/01/2018]

Overfishing, changing marine conditions, and habitat perturbations all contributed to declines in abundance. Excessive removals occurred in the early 1990s when the impacts of fishing and concomitant declines in productivity were not yet evident to managers. Ongoing unfavourable marine conditions, disturbance of the freshwater habitat and introduction of invasive non-native species pose a continuing threat to all Interior Fraser Coho Salmon.[Updated 22/01/2018]