Scientific Name: Megascops kennicottii kennicottii
Other/Previous Names: Otus kennicottii kennicottii
Taxonomy Group: Birds
COSEWIC Range: British Columbia
COSEWIC Assessment Date and Status Change: May 2012
COSEWIC Status: Threatened
COSEWIC Status Criteria: C1
COSEWIC Reason for Designation: This small owl has shown serious declines in the southern part of its range in Metro Vancouver, Victoria and the Gulf Islands areas, where it has nearly disappeared over the last 10 to 15 years. Based on observed declines reported in Alaska, it has likely also declined in the northern part of its range, but the magnitude of the decline is unknown. The population is thought to be relatively small (less than 10,000 adults) and the owls face ongoing threats including predation from newly established populations of Barred Owls, and the removal of dead trees and snags, which serve as nest sites and roosts.
COSEWIC History of Status Designation: Species considered in April 1995 and placed in the Data Deficient category. It was split according to subspecies in May 2002. The kennicottii subspecies was designated Special Concern in May 2002. Status re-examined and designated Threatened in May 2012.
SARA Status: Schedule 1, Threatened
Date of Listing (yyyy-mm-dd): 2005-01-12 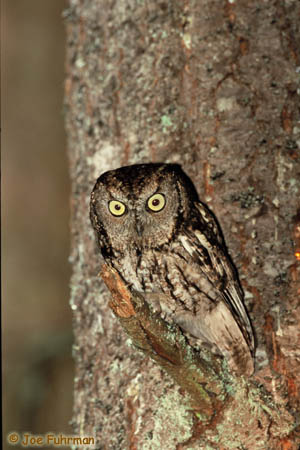 There is some disagreement over the number of subspecies of the Western Screech-owl. We are following the most current source, which recognizes two subspecies in Canada, macfarlanei and kennicottii. The ranges of these subspecies do not overlap.

The Western Screech-Owl, Petit-duc des montagnes in French, is one of two species in the genus Megascops in Canada. It is a small owl with distinct “ear” tufts and yellow eyes; sexes are alike. There are two distinct subspecies in Canada: the kennicottii subspecies along the Pacific coast and the macfarlanei subspecies in the valleys of the southern interior of British Columbia. (Updated 2017/05/25)

The Western Screech-Owl is found at low elevations in Pacific coastal forests, and at lower elevations from the southern interior of British Columbia south through mountain valleys to northwestern Mexico. In Canada, it is found in coastal British Columbia (except Haida Gwaii) and in the valleys of southern British Columbia from Lillooet, Kamloops, Lumby, Slocan, Creston and Cranbrook south to the US border. (Updated 2017/05/25)

The kennicottii subspecies is found in a variety of coniferous and mixed forests, but is often associated with riparian zones with Broadleaf Maple or Black Cottonwood. The macfarlanei subspecies is strongly associated with riparian woodlands dominated by Black Cottonwood, Water Birch or Trembling Aspen, usually located in a matrix of dry coniferous forests dominated by Ponderosa Pine or Douglas-fir. Both subspecies nest in natural tree cavities or holes excavated by larger woodpeckers, and will use appropriate nest boxes. (Updated 2017/05/25)

The Western Screech-Owl kennicottii subspecies is protected under the federal Species at Risk Act (SARA). More information about SARA, including how it protects individual species, is available in the Species at Risk Act: A Guide.