Scientific Name: Thamnophis sauritus
Other/Previous Names: Northern Ribbonsnake (Atlantic population)
Taxonomy Group: Reptiles
COSEWIC Range: Nova Scotia
COSEWIC Assessment Date and Status Change: November 2012
COSEWIC Status: Threatened
COSEWIC Status Criteria: C2a(i)
COSEWIC Reason for Designation: Recent extensive survey efforts to quantify the abundance and distribution of this cryptic and hard to identify snake confirm that it is rare and has a very small distribution. However, little is known about population trends. Fluctuations in population numbers and a continuing decline in overall numbers of mature individuals are suspected; both increase the susceptibility to stochastic events. Shoreline development and its associated risk is an increasing threat throughout much of the range.
COSEWIC History of Status Designation: Designated Threatened in May 2002. Status re-examined and confirmed in November 2012.
SARA Status: Schedule 1, Threatened
Date of Listing (yyyy-mm-dd): 2005-01-12 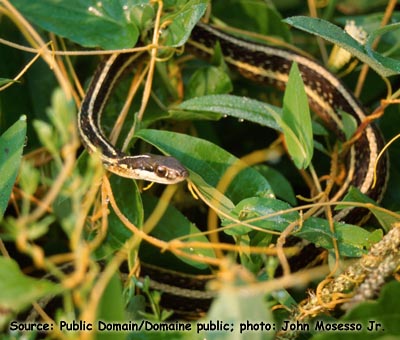 The Eastern Ribbonsnake has three yellow longitudinal stripes on its back against a dark brown to black background. The chin and throat are pure white to fawn-coloured, and the belly is pale green, yellow, or white. The Eastern Ribbonsnake strongly resembles the more common and closely related Eastern Garter Snake in both colour and size. The most reliable way to distinguish between the two species is to see which scale rows have yellow stripes, but this is usually only possible with a captured specimen. In the field, one has to rely on comparisons; Ribbonsnakes are more slender and have longer tails than garter snakes. The tail accounts for at least one-third of the total length of an adult Eastern Ribbonsnake (46 to 86 cm). Both sexes have the same colour pattern, but females tend to be slightly larger and thicker-bodied than males. The young are miniature replicas of their parents.

The North American distribution of the Eastern Ribbonsnake extends from around the Great Lakes east of Lake Michigan to Florida. In Canada, there are two populations: the Great Lakes population of southern Ontario that is part of the main range of the species in the United States; and the separate Atlantic population in Nova Scotia. The latter is limited to three watersheds in the southern portion of the province, and it is thought to be a relict from when a milder climate existed in North America approximately 5000 years ago. Eastern Ribbonsnakes are rare in Nova Scotia. In 1998, the Atlantic population was estimated at 1000 to 3000 individuals. Because no earlier population estimates exist, trends for this population are unknown.

The Eastern Ribbonsnake is semi-aquatic. It is most frequently found along the edges of shallow ponds, streams, marshes, swamps, or bogs bordered by dense vegetation that provides cover. Abundant exposure to sunlight is also required, and adjacent upland areas may be used for nesting.

Eastern Ribbonsnakes are diurnal (active during the day), gregarious, and very active, but timid and generally docile. They feed primarily on amphibians, particularly frogs. During winter (October to April), Eastern Ribbonsnakes hibernate in rock crevices, animal burrows, and even in ant mounds. Soon after they emerge in early spring, adults begin courtship, followed by mating. Females may move away from their normal habitats to drier areas to nest, as indicated by occasional observations of females and juveniles in upland areas. Live young are born in the early fall, usually in September. Litters are small, averaging 5 to 12 young, which are 16 to 24 cm long at birth. They take two to three years to reach maturity.

The greatest threat to the Atlantic population of the Eastern Ribbonsnake is habitat loss due to an increase in lakeshore cottage development, combined with increased predation by house cats. A general decline in amphibian prey, collecting, accidental death on roads, and natural predation may also threaten the population.

The Eastern Ribbonsnake, Atlantic population, is protected under the federal Species at Risk Act (SARA). More information about SARA, including how it protects individual species, is available in the Species at Risk Act: A Guide.

Although the Eastern Ribbonsnake was assigned a "yellow" status in Nova Scotia, indicating that it is ecologically sensitive and may require special attention, it is not yet listed under Nova Scotia’s Endangered Species Act. Where it occurs in Kejimkujik National Park, the species is protected by the National Parks Act.

Summary of Progress to Date Little is known about the Eastern Ribbonsnake in Nova Scotia. Activities of the Eastern Ribbonsnake Recovery Team have focused on filling the knowledge gaps, identifying new sites to target for stewardship activities, and informing and engaging the public in ribbonsnake recovery. A public awareness pamphlet, distributed in Nova Scotia, encourages the public to report any ribbonsnake sightings and increases awareness of the Eastern Ribbonsnake. This educational component is very important in the recovery of this species as it helps lessen the fear people have of snakes. Active local involvement also encourages positive attitudes towards snake species at risk and their recovery. Summary of Research/Monitoring Activities Surveys of Eastern Ribbonsnakes are conducted daily in spring (April/May) and fall (September/October) at Grafton Lake in Kejimkujik National Park. Additional surveys are conducted at sites with known populations throughout the range of the Eastern Ribbonsnake in Nova Scotia. These surveys look at the behaviour and dynamics of this species as well as the distribution and identification of their critical habitat. In 2007, researchers will attempt to radio track individual snakes to identify movements and seasonal habitat use. Data collected will help to identify areas to focus future stewardship activities, particularly in regions where the Eastern Ribbonsnake and Blanding’s Turtle habitat overlap. As the overall distribution of Eastern Ribbonsnakes in Nova Scotia remains unknown, Nova Scotia’s Eastern Ribbonsnake Recovery Team systematically searches potential habitat to look for ribbonsnakes. Many of the wetlands in south-western Nova Scotia are not easily accessible, thus limiting much of the search effort to the most accessible wetland habitat. The public participates in these searches by reporting sightings of ribbonsnakes and conducting surveys. Habitat data is collected at each site surveyed in an attempt to determine any distinctive habitat features that will help to predict areas where ribbonsnakes reside. Small samples of DNA are collected from each ribbonsnake that is encountered during the surveying (snakes are hand-captured, marked, and then released during this process). The data collected will help to increase knowledge of the population’s genetic structure. This information will help researchers identify long-term movement patterns between concentration sites, assess the risk of inbreeding depression, and determine if the Nova Scotia population is genetically different from other parts of the species’ range. Researchers are examining the possible factors causing this species to emerge from their over-wintering sites in the spring, including the effects of underground temperature, water level, and the snake’s biological clock on their emergence. Summary of Recovery Activities Information on this species is produced and distributed to the public in presentations, pamphlets, websites, and through one-on-one landowner contact with the intent of increasing the positive perception of the Eastern Ribbonsnake and other snake species at risk. In 2004, a trial public information brochure was well received and distribution in southwest Nova Scotia followed in 2005 and 2006. A large-scale school presentation also was initiated in this region in 2005. Recovery volunteers attend community events, such as fairs, meetings, and exhibitions. A toll-free reporting line was re-established for species at risk in 2004, which has helped people report ribbonsnake observations. The Eastern Ribbonsnake is one of many snake species included in the Sciensational Sssnakes program. This program focuses on increasing public awareness about reptiles at risk, thus positively changing people’s attitudes about reptiles and engaging citizens in recovery activities. Many landowners have been contacted through site visits, informed about ribbonsnakes, asked for permission to conduct surveys on their land, and encouraged to participate in ribbonsnake recovery. There are many opportunities for members of the public to get involved directly in ribbonsnake research and recovery through the stewardship programs, which are expanding in 2007. URLs Nova Scotia’s Eastern Ribbonsnake Recovery Team:http://www.speciesatrisk.ca/ribbonsnake/ Eastern Ribbonsnake Information Pamphlet:http://www.speciesatrisk.ca/ribbonsnake/Ribbonsnake%20pamphlet.pdf Parks Canada: Time for Nature:www.pc.gc.ca/canada/pn-tfn/itm2-/2005/2005-12-05_e.asp Sciensational Sssnakes:http://www.scisnake.com/ Nova Scotia Museum of Natural Historyhttp://museum.gov.ns.ca/mnh/nature/snakes/ribbon.htm