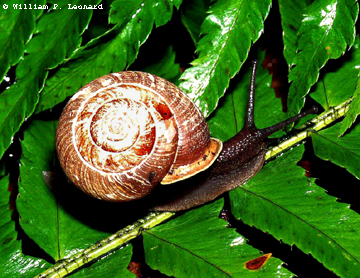 The Puget Oregonian Snail is a member of the Polygrid family, a large and diverse group of land snails that are found only in North America. The spiral shells of mature individuals are pale yellowish to brown, with a slightly flattened, globe-like shape, and five to six whorls that increase regularly in diameter. The aperture (opening in the shell) has a broad, whitish lip that is obviously bent backwards. There is also a tooth-like structure on the inside of the second-last whorl of the shell that sticks out into the aperture. The shells of adults are 18 to 26 mm in diameter. The body of the snail is light brown, and may have a lilac undertone. Young snails superficially resemble the adults, but lack both the lip at the aperture and the tooth-like structure.

No information is available on the habitats previously used by the Puget Oregonian Snail in Canada. In the United States, the snail lives in moist, old-growth forests, and forested riverbank areas at low and middle elevations. Essential habitat characteristics include: shade provided by the forest canopy, which conserves moisture and buffers fluctuations in temperature and moisture conditions on the forest floor; coarse woody debris and leaf litter for escape cover and egg-laying sites; and fungi for food.

Little is known of the ecology and life history of the Puget Oregonian Snail. The snails are hermaphroditic (have both male and female sexual organs) and move by creeping along on a sucker-like foot. Like other forest-dwelling land snails, the Puget Oregonian Snail probably needs protected, moist locations to lay eggs, takes at least five years to become sexually mature, and is long-lived. The diet of the Puget Oregonian Snail is unknown, but it is suspected to include plants and fungi. A wide variety of mammals, birds, amphibians, reptiles, and other invertebrates feed on land snails. The scattered distribution of the species throughout its range has led to the conclusion that the Puget Oregonian Snail is not very adept at dispersing to new locations. The poor ability of the snail to disperse probably means that, if it disappears from a local habitat patch, it is unlikely to repopulate that spot through immigration from another population.

The reason that the Puget Oregonian Snail became extirpated in Canada is unknown, and it seems likely that the species was uncommon when it did occur. Areas of historic records have undergone extensive habitat loss and fragmentation, and the quality of the remaining habitat has deteriorated. Populations of species at the extreme edge of their range also are more vulnerable to climatic fluctuations and chance events.