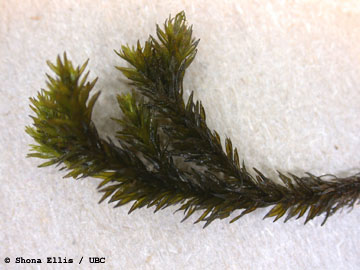 The Margined Streamside Moss is a relatively large, cushion-forming moss that grows in dark green or yellowish-brown to blackish tufts. Its stems are frequently branched and range in length from 6 to 10 cm. The leaves are lance-shaped, 2.5 to 4 mm long, and about 1 mm wide.

Globally, the Margined Streamside Moss is restricted to the Pacific Northwest in North America. The only population known to occur in Canada is in the Kootenay region of British Columbia near the border with the United States. There is no information on the population size or trends of the Canadian population. The Margined Streamside Moss has not been found at the site since the original discovery. As the area has been heavily disturbed, it is possible that the species is now extirpated from this location.

Margined Streamside Moss grows on rocks, particularly granite, in streams. It may be exposed or submerged, and is found at a range of elevations. The population found in southern British Columbia was on wet rocks at an elevation of 1300 m. In the United States, it is usually mixed with the more common Scouleria aquatica and requires clean water and cool temperatures.

Flooding, cattle usage, and sedimentation threaten the Margined Streamside Moss. In particular, deposits of silt on boulders in the streams interfere with the establishment of the moss.

Summary of Progress to Date The draft recovery strategy has been completed. The species was not relocated during an inventory completed during the summer of 2005.