Scientific Name: Fabronia pusilla
Taxonomy Group: Mosses
COSEWIC Range: British Columbia
COSEWIC Assessment Date and Status Change: May 2012
COSEWIC Status: Endangered
COSEWIC Status Criteria: D1
COSEWIC Reason for Designation: This is a small species that grows among other mosses as an epiphyte on trees or on rock faces. In Canada, it is known from only one cliff in southwestern British Columbia. Although the species has not been found during recent surveys, the expanse of available habitat at the only known site, combined with the small stature of the moss, suggests that the species may still be present in Canada.
COSEWIC History of Status Designation: Designated Endangered in November 2002. Status re-examined and confirmed in May 2012.
SARA Status: Schedule 1, Endangered
Date of Listing (yyyy-mm-dd): 2005-01-12 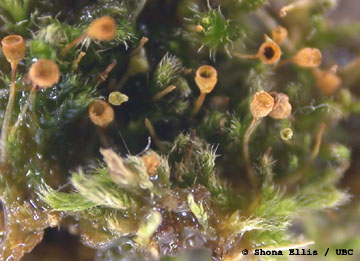 The Silver Hair Moss is a tiny, creeping moss that grows in thin, flat mats, often mixed in with other moss species. It has narrow stems with an irregular branching pattern. The oval to lance-shaped leaves are less than 1 mm long and less than 0.5 mm wide, and each leaf tip ends in a microscopic hair-like projection. The leaves are pressed together along the length of the stems, except for the leaf ends that tend to stick out toward the end of the stem. Overall, the moss appears silvery to whitish-green.

Globally the Silver Hair Moss is found in western North America, western Europe, and northern Africa — principally in Mediterranean-type climates. In Canada, it is at the northern limit of its distribution, and has only been found at two sites in British Columbia: near Lower Arrow Lake in the Kootenay Valley, and on Sumas Mountain east of Abbotsford. The Arrow Lake site is now submerged behind a dam, and the Silver Hair Moss has not been collected from that area since the late 1800s. It was collected from Abbotsford in 1968, but was not found during three excursions to the site in 2001. The small size of the Silver Hair Moss, its habit of growing in with other mosses, and the inaccessibility of much of its potential habitat at this site, may result in Silver Hair Moss not being found during field surveys.

Silver Hair Moss grows on semi-exposed rock or the surface of tree bark. Both of the known sites in British Columbia have hot summers and cool to cold winters.

Very little is known about the biology of the Silver Hair Moss. It is autoicous — with male and female organs on the same stem — and likely does not spread vegetatively. The spores (the reproductive bodies that the new plants arise from) are likely spread by the wind, but it is not known how far they are dispersed, or how easily they germinate. The Silver Hair Moss usually grows mixed in with other moss species, which typically are larger than it is, and may out-compete it in the habitat it uses.

The Silver Hair Moss is at the northern extent of its range, and therefore vulnerable to chance events. No notable external threats to the population are known.

Summary of Progress to Date The draft recovery strategy has been completed. The species was not relocated during an inventory completed during the summer of 2005.