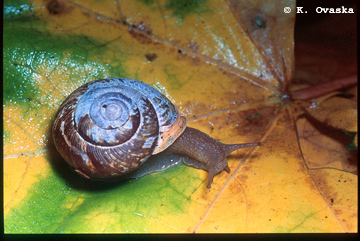 Oregon Forestsnail (Escargot-forestier de Townsend) is a member of a large and diverse family (Polygyridae) of North American land snails. The shell of mature individuals is pale brown or straw-yellow, round and flattened, and ranges from 28-35 mm in diameter. The apertural lip of the shell is pale and broadly expanded. Unlike some related species, the aperture (shell opening) lacks tooth-like structures (denticles). The shell is smooth and without hair-like projections as in some related snails. Relatively few native, large land snails inhabit coastal forests in British Columbia (BC). The presence of the Oregon Forestsnail in Canada is of both scientific and conservation interest, as populations at the northern limits of their geographical range might possess unique adaptations. (Updated 2017/06/12)

Oregon Forestsnail occurs in the western Cascade Range, Puget Trough, and eastern lowlands of the Olympic Peninsula in the United States north into extreme southwestern BC. Oregon Forestsnail are found from Tsawwassen through the Lower Mainland towards Langley, with most records occurring within the Lower Fraser Valley in the Mission, Abbotsford, Chilliwack area, and as far east as Hope. There is one outlying site on southern Vancouver Island near Crofton. (Updated 2017/06/12)

Oregon Forestsnail occupies mixed-wood and deciduous forest habitat, typically dominated by Bigleaf Maple, Balsam Poplar and scattered Western Redcedar. Many records are from riparian habitats and forest edges, where dense cover of low herbaceous native vegetation is typically present. The presence of Oregon Forestsnail is correlated with the presence of Stinging Nettle, although the specific connection between these two species has not been studied. Stinging Nettle is known to have high levels of calcium, which is necessary for healthy shell growth in snails. All known Canadian Oregon Forestsnail populations are from habitats less than 360 m above sea level. (Updated 2017/06/12)

Oregon Forestsnail is hermaphroditic. The surface activity of the snails appears to peak in spring and early summer, coinciding with mating and oviposition. They appear to be slow maturing and long-lived, reaching maturity at two years and living from five to eight years. Their dispersal ability is likely poor, based on the scattered distribution of the species throughout its geographic range. (Updated 2017/06/12)

The Canadian range of Oregon Forestsnail coincides with the most densely populated and highly fragmented region of BC. The most serious threat to Oregon Forestsnail is continuing residential and commercial development, resulting in further fragmentation and isolation of populations. Snails have limited dispersal capabilities and cannot move between habitat patches or colonize suitable habitat if there are barriers to dispersal. Additional threats include recreational activities and invasive non-native/alien species. (Updated 2017/06/12)