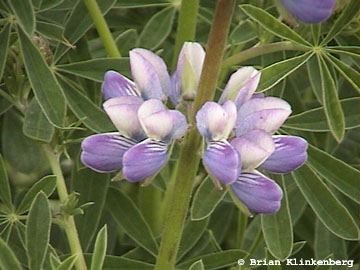 The Streambank Lupine is a multi-stemmed perennial that reaches heights of 40 to 60 cm. It is an erect, herbaceous plant that can be slightly woody at the base. At first glance the leaves look smooth, but small hairs can be seen with a magnifying glass. The delicate leaves are compound (each is a grouping of smaller, individual leaflets) and palmate (arranged like fingers on a hand). The leaflets are long and narrow with a pointed tip, and are arranged in groups of six to nine. The lavender, pea-like flowers are grouped vertically along the stem above the leaves. Five to eight groups of flowers are arranged vertically along the racemes (flowers grouped along a vertical stem), which are 12 to 25 cm long. The Streambank Lupine flowers from May to September; most other lupines with which it may be confused do not begin to flower so early. The seedpods are black, or mottled black.

Globally, the Streambank Lupine is found only along the Pacific Coast, from northwestern California to southwestern British Columbia. In Canada, there are six known populations in the southwestern corner of British Columbia: five are found in the lower Fraser Valley, and one is on Vancouver Island. The size of the six populations known to occur naturally in British Columbia ranges from 1 to 100 plants. Trend information is not available for this species, but it is known to have suffered extensive habitat alteration and loss.

The Streambank Lupine is generally found along riverbanks in sites with little ground cover, although it can grow under trees where sufficient light gets through. Before the building of dykes, these sites normally would have flooded regularly. The lupine prefers sandy or gravelly soil at low elevations close to the coast, where there is little competition from other plants. It is also found along railway tracks.

The Streambank Lupine is an attractive, herbaceous perennial. It has a long taproot (a root like a carrot) and few fine roots, which helps it retain moisture in dry and disturbed conditions. The roots are nodulated (have small swellings containing bacteria that help fix nitrogen), enabling these plants to grow in dry and impoverished soil, where few other plants survive. The Streambank Lupine hybridizes (interbreeds with other closely related species and produces viable seed) readily with other native lupines. It flowers from May to September; and from June onwards, it produces large amounts of heavy seed that can be thrown up to eight metre from the parent plant when the seedpods explode. Seeds are likely dispersed by birds and rodents, and may also be spread by mowing activities along dykes and railway beds.

It is believed that the Streambank Lupine may have been more widespread along the Fraser Valley before the development of industry. Dykes built along the coastal stretch of the Fraser riverbank may have left the populations too dry to prosper. Maintenance work along the dykes and railway lines, including herbicide spraying and mowing, may eventually kill mature plants. Another threat comes from hybridization with the invasive (weedy) Yellow Bush Lupine Lupinus arboreus. This can result in genetic swamping (the genes of one species are overwhelmed by the genes of the other when the plants hybridize). Wildflower seed packets often contain Streambank Lupine seeds that may come from California; if so, they are likely to be from plants that have already hybridized with Yellow Bush Lupine. The spread of these hybrids, and of Yellow Bush Lupine itself, could lead to the eradication of the Streambank Lupine. The destruction of seedlings by non-native slugs such as the European Furrowed Slug Arion ater, and the picking of flowers by people, also pose a threat to this species.

Summary of Research/Monitoring Activities Several key ecological knowledge gaps exist for the Streambank Lupine, which require research and ongoing monitoring activities. Detailed plant ecology, demography, and genetic work are a priority. These include determining the site characteristics of existing populations; determining the limiting factors for germination and population expansion; determining the extent of the habitat required at each site, including analysis of soil chemistry, moisture, etc.; and determining the disturbance dynamics (natural versus artificial). Summary of Recovery Activities Contact with most stakeholders has been carried out through the participation and activities of the recovery team. Plans for landowner contact with private landowners are underway and an educational brochure for this species has been developed. Population stabilization methods, with guidance from the recovery team, are already underway within the lower Fraser Valley populations in cooperation with stakeholders and landowners, including fencing, parking lot barriers, signage, and site mapping. Members of the recovery team have conducted site assessments identifying initial management needs. URLsStreambank (Riverbank) Lupine:http://www.geog.ubc.ca/~brian/lupinusrivularis.htm