Scientific Name: Antennaria flagellaris
Taxonomy Group: Vascular Plants
COSEWIC Range: British Columbia
COSEWIC Assessment Date and Status Change: May 2004
COSEWIC Status: Endangered
COSEWIC Status Criteria: B1ab(ii,iii,v)+2ab(ii,iii,v)
COSEWIC Reason for Designation: A short-lived perennial plant present at only three geographically restricted localities occupying very small areas of specialized habitat of ephemerally moist seepage sites on private lands. It is at greatest risk from ATV use that currently is evident in close proximity to the populations. It may also be impacted by changes in ground water hydrology and surface impacts from increased development activities in the area such as the proposed production of coalbed methane.
COSEWIC History of Status Designation: Designated Endangered in May 2004.
SARA Status: Schedule 1, Endangered
Date of Listing (yyyy-mm-dd): 2005-07-14 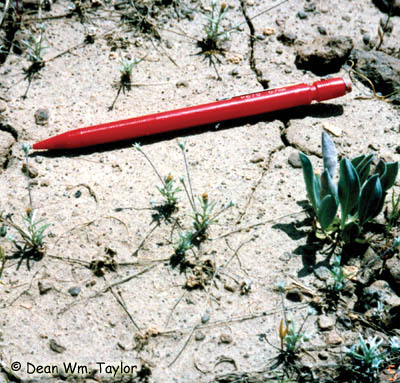 The Stoloniferous Pussytoes is a small perennial that gets its name from its stolons, or horizontal stems, by which it propagates outwards from its clump of fine roots. The stolons are up to 10 cm long, while the few central flowering stems are up to 3.5 cm tall. The leaves are narrow and elongated, sometimes flaring slightly at the tip. They are 1 to 3 cm long and covered with fine, woolly hairs. The plant has numerous leaves at the base, but few stem leaves. The flowers are grouped in heads at the tops of the stems. Depending on the plant, the heads are composed either entirely of female flowers measuring 5 to 7 mm, or entirely of smaller, male flowers measuring 3 to 4.5 mm. The flower heads are accompanied by leaves called bracts. In the female flowers, the bracts are tinged brown or reddish-brown, are 7 to 13 mm long, and have thin, woolly hairs below. In the male flowers, the bracts are brownish at the tips, translucent and 4 to 7 mm long. The Stoloniferous Pussytoes produces dry fruits called achenes that are 2 to 3 mm long. They are elliptical and have small, wartlike bumps on their surface. Each achene contains a single seed. The mature achenes have numerous fine white silky hairs, 6 to 8 mm long.

The Stoloniferous Pussytoes ranges from southwestern British Columbia south into Idaho, Wyoming, Nevada and California in the western United States. In Canada, the species has been observed only in the Similkameen River Valley, southwest of Princeton, in southwestern British Columbia. Three populations of Stoloniferous Pussytoes have been found in the Similkameen River Valley along a 3.2-km stretch of Highway 3. In 2003, these populations comprised roughly a million plants, occupying a total area of approximately 2200 m². To date, close to 30% of the potential habitat of this species has yet to be surveyed.

In Canada, the Stoloniferous Pussytoes grows on eroded, unstable slopes that face south and have a pitch of 20 to 30%. The three sites are confined to chalky clay soils and characterized by seasonal seepage. These soils are saturated by groundwater in winter and dry up in summer. Few species can tolerate the conditions in these ephemeral habitats, which are unique in the Princeton area. Consequently, this species dominates the sparse vegetation on these disturbed slopes. Not far from these sites, the vegetation is characterized by scrub steppe dominated by big sagebrush with scattered ponderosa pines and Douglas-fir.

Little information is available on the biology and ecology of the Stoloniferous Pussytoes in British Columbia; some basic facts about its reproduction are all that has been compiled. The Stoloniferous Pussytoes is a perennial and is dioecious, meaning that the male and female flowers occur on separate plants. The female flowers are pollinated by the wind. The species thus produces seeds by sexual reproduction. The plants with female flowers produce dry fruits, called achenes, which are dispersed by the wind. This dispersal is facilitated by the numerous hairlike bristles on the mature fruit. The plant can also propagate vegetatively by producing stolons that terminate in plantlets. These young plants eventually become independent as the stolons connecting them to the mother plant become severed over time. This mode of reproduction results in very limited dispersal, because the stolons grow to no more than 10 cm long. The average lifespan of the individual plants is short.

The main factor threatening the populations of Stoloniferous Pussytoes is the smallness of the area that they occupy. Also, because the habitats suitable for this species are extremely restricted, the opportunities for colonization and expansion are correspondingly limited. Another threat facing this species is the possible impact of the recreational use of all-terrain vehicles. Some signs of use of these vehicles have been observed near the sites. Such activity could disturb the habitat sufficiently to make it inhospitable for the Stoloniferous Pussytoes but welcoming for invasive species. The three Canadian populations of Stoloniferous Pussytoes are located on two private properties within British Columbia’s Agricultural Land Reserve. Recently, the area has seen an increase in residential construction and the owners of these lands might conceivably apply in future to have them taken out of the reserve for development, especially since their soil is not highly suitable for agriculture. Some of the activities that are currently allowed in the reserve may also threaten the persistence of this species. The measures used to control weeds along power transmission lines constitute another potential threat for the Stoloniferous Pussytoes populations located less than 150 m from the lines. Lastly, the potential development of coalbed methane from deposits underlying the region around Princeton could seriously disturb the habitat of this species.

At present, the Stoloniferous Pussytoes is not protected by any provincial laws in British Columbia. However, the populations in this province are partly protected from certain kinds of development, because they are located on private properties in the Agricultural Land Reserve.