Scientific Name: Apodemia mormo
Taxonomy Group: Arthropods
COSEWIC Range: British Columbia
COSEWIC Assessment Date and Status Change: May 2014
COSEWIC Status: Endangered
COSEWIC Status Criteria: C2a(i)
COSEWIC Reason for Designation: This butterfly is found in very small numbers within small habitat patches in the narrow valley bottoms of the Similkameen and Okanagan valleys of southern British Columbia. The valley bottoms are also an important transportation and utility corridor, and the butterfly is threatened by road maintenance and other land development activities, as well as the growth of invasive plants that shade out their host plants.
COSEWIC History of Status Designation: Designated Endangered in May 2003. Status re-examined and confirmed in May 2014.
SARA Status: Schedule 1, Endangered
Date of Listing (yyyy-mm-dd): 2005-01-12 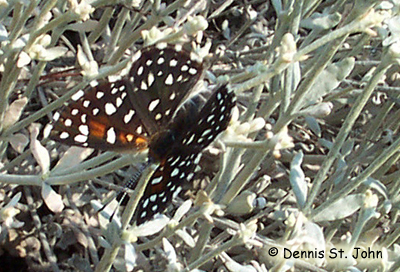 Mormon Metalmark, Apodemia mormo (Family Riodinidae) is a small butterfly (wingspan 25 to 32 mm) that is dorsally dark brown and ventrally grey, with white spots and black marks on the wings. The central forewings are orange on both dorsal and ventral surfaces. The larvae are up to 25 mm long, dark purple with yellow spots, and clumps of black bristles. (Updated 2017/05/25)

The Canadian range is represented by two disjunct populations. The Southern Mountain Population is restricted to south-central British Columbia (BC) and the Prairie Population restricted to southwestern Saskatchewan (SK) (Prairie Population). In BC, the butterfly occurs in the Similkameen Valley from the international border to Olalla and west to Keremeos. It is also known from one extant site in the south Okanagan Valley near Osoyoos and historically as far north as Okanagan Falls. Within this range it occupies an area of less than 50 ha in small, scattered sites at low elevation (450-680 m above sea level). In SK, Mormon Metalmark is found in the East and West Blocks of Grasslands National Park, and a few adjacent private properties and community pastures. (Updated 2017/05/25)

Mormon Metalmarks are associated with open, arid habitats that support the larval host plants, buckwheats. The Southern Mountain Population is primarily found on eroding sandy-gravelly and rocky slopes with Snow Buckwheat. These include natural hillsides and human-modified habitats such as roads and transmission rights-of-way, railway embankments, and gravel pits. The Prairie Population is typically associated with Few-flowered Buckwheat and Rubber Rabbitbrush, the larval host plant and main adult nectaring source respectively. They can be found on eroding, clay slopes in the prairie badlands, as well as more level terrain. (Updated 2017/05/25)

In Canada, Mormon Metalmarks have one generation per year. Eggs or early instar larvae overwinter in the soil or at the base of their larval host plants. The species has five larval instars and pupates for several weeks in July, within debris near the base of host plants. The adult flight period is from late July until late September with a peak in mid- to late August. Individual adults live about 10 days and primarily nectar on Stinking Rabbitbrush and the larval host plant. The maximum dispersal in the Southern Mountain Population is estimated as 4 km but for most individuals is probably less (

The primary threat to the Southern Mountain Population is habitat degradation and loss, which has resulted in the loss of at least one site within the past decade. Right-of-way maintenance disrupts roadside sites in the Similkameen Valley, and gravel extraction could affect the largest known site in Keremeos. Conversely, minor disturbance may benefit host plants by maintaining the early successional habitat required for these plants. Most Prairie Population sites are protected within Grasslands National Park and have no primary threats. However, the divestment of federal community pastures to the province of SK may result in the sale of these lands to private individuals or private business consortiums. Non-native weeds can be significant competitors of host plants at some sites, potentially reducing larval food supply. The distribution of the larval host plants limits the areas of potential habitat for Mormon Metalmark in both the Southern Mountain and Prairie DUs, but both buckwheat species occur in many areas where the butterfly is currently absent. Both Canadian populations are at the northern limits of the species’ range so microclimate and related site variables (e.g., slope, aspect) may be limiting factors. (Updated 2017/05/25)

The Mormon Metalmark, Southern Mountain population, is protected under the federal Species at Risk Act (SARA). More information about SARA, including how it protects individual species, is available in the Species at Risk Act: A Guide.

Summary of Progress to Date A recovery strategy has been developed for both the British Columbia Southern Mountain and Saskatchewan Prairie Mormon Metalmark populations. Most of the recovery activities pertain to the Southern Mountain population since less is known about the prairie population. Summary of Research/Monitoring Activities Existing populations are routinely monitored to determine population trends and influences on these trends. Inventories to identify any additional colonies also are being conducted. Surveys and inventories of extant sites in the Similkameen Valley, BC took place in 2003. Research is taking place to identify Mormon Metalmark dispersal abilities. Their reproductive success and the impact of predation on survival rate also are being investigated. Potential habitat is being mapped. Any fluvial banks, natural or artificial, are being identified and searched for undetected populations, and the distribution of larval and nectar food sources are being mapped. Summary of Recovery Activities Public outreach and stewardship programs are underway to raise awareness of these butterflies and their habitat. A “Butterflies of the Okanagan” pamphlet has been produced describing the Southern Mountain population and its habitat. URLs Butterflies of North America:http://www.npwrc.usgs.gov/resource/distr/lepid/bflyusa/usa/384.htm Environment Canada: Mormon Metalmark (Prairie Population):http://www.pnr-rpn.ec.gc.ca/nature/endspecies/sar/db08s35.en.html Government of Canada: Mormon Metalmark:http://www.cbif.gc.ca/spp_pages/butterflies/species/MormonMetalmark_e.php