Scientific Name: Bryoandersonia illecebra
Taxonomy Group: Mosses
COSEWIC Range: Ontario
COSEWIC Assessment Date and Status Change: November 2017
COSEWIC Status: Threatened
COSEWIC Status Criteria: D1
COSEWIC Reason for Designation: This large, long-lived, profusely branching moss is known in Canada only from southern Ontario, where most locations fall within the highly fragmented Carolinian zone. Potential threats include pollution, recreational activities, forestry, and residential and commercial development. Although it is more abundant within this restricted ecological zone than it was thought to be when first assessed by COSEWIC, it is still uncommon, and its absence from large areas of apparently suitable habitat suggests limitation by additional threats or natural factors. When present, the number of colonies is typically low even with intensive search effort. While the presence of this species in recently created habitats shows that dispersal is possible, the means by which it is achieved is not certain. Only female plants have been recorded in Canada and sporophytes have never been observed.
COSEWIC History of Status Designation: Designated Endangered in May 2003. Status re-examined and designated Threatened in November 2017.
SARA Status: Schedule 1, Threatened
Date of Listing (yyyy-mm-dd): 2005-01-12 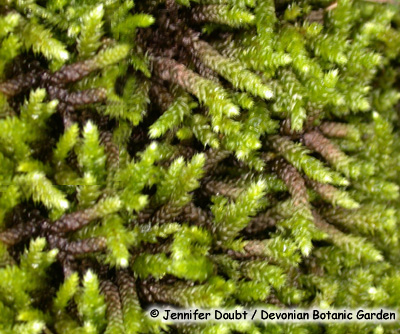 A monotypic genus, Bryoandersonia is a genus with only one species in it, illecebra.

A large, attractive moss, Spoon-leaved Moss takes its name from its deeply concave leaves. The leaves are loosely heart-shaped and from 1.3 to 2.8 mm long. They spread when moist; when dry, they overlap, press close together and the tips become twisted. The stems grow in green-yellow-brown mats and branch readily upwards to blunt tips, which in mature specimens can be reminiscent of rat-tails. The seta (the stalk that supports the capsule that bears the spores) is smooth, red, and from 1.3 to 2.5 cm long.

Spoon-leaved Moss is found only in eastern North America, where its range approximates that of the Carolinian (eastern deciduous) forest of North America. It occurs most commonly in the south. It ranges from southern Ontario, east to New York and Connecticut, down along the coast to the Northern Carolinas and west to Texas, and then east again as far as northwestern Florida. Despite relatively intensive searches, there are fewer than eight known Canadian sites of Spoon-leaved Moss, all in the extreme southern part of southern Ontario. In 2001 and 2002, only two of these eight colonies were found; in Essex and Elgin counties. A third site, previously unknown, was found in Welland County.

Although it can grow on rocks or tree bases, all known colonies of Spoon-leaved Moss in southern Ontario have been on soil. While historic Ontario locations for Spoon-leaved Moss have included cedar swamps, deciduous forests, pine plantations, and areas of Hawthorne and Juniper scrub, extant (still in existence) Canadian colonies are confined to soil that is in or near flat, low-lying, seasonally wet areas. Spoon-leaved Moss may prefer such wet conditions when it occurs this far to the north of its range, but it may be that people less often disturb such swampy sites.

Little is known of the biology of Spoon-leaved Moss. Like all mosses, it requires periodic moisture. It is dioecious (male organs and female organs occur on separate plants). As the sperm cells are not capable of moving very far, the separate male and female plants must be within a few centimetres of each other for fertilization to occur. No fruiting bodies were observed at any of the extant Canadian sites, and only female plants were found. Spoon-leaved Moss can spread vegetatively, but only by creeping; in the absence of sexual reproduction, it cannot spread beyond the surface on which it grows. This leaves it at a disadvantage in disturbed areas, where a species’ survival may depend on the ability to disperse to new sites. The soil banks preferred by Spoon-leaved Moss can be relatively continuous, which may be important to the moss in its northern range; however, its ability to exploit available habitat is limited, particularly as human encroachment leads to increasing fragmentation of what remains of the Carolinian forest.

Even if it was pristine, the small southern part of Canada that supports Carolinian forests offers only a limited amount of suitable habitat for the Spoon-leaved Moss. As it is, this modest scattering of habitat lies in the most heavily developed region in Canada and is under intense pressure from further development. Forest destruction and fragmentation further decreases available habitat, and increases this species’ overall vulnerability. Habitat fragmentation also diminishes the likelihood of genetic exchange, lowering the likelihood of male and female plants being near each other. As well, the increased pollution associated with development is detrimental to mosses such as the Spoon-leaved Moss.

Two of the three Canadian populations of Spoon-leaved Moss are on public land, where they receive some protection. The third, privately owned site is part of an Ontario Area of Natural and Scientific Interest (ANSI), providing it some protection through stewardship and municipal zoning.

Summary of Research/Monitoring Activities Field surveys were conducted in Ontario in 2002 to update the COSEWIC status report. Populations at three sites were relocated. All known extant sites are now in public ownership. The Cedar Creek population has been recently acquired by the Nature Conservancy of Canada and has since become a Provincial Nature Reserve. Additional colonies were discovered at two of the sites when surveyed again in 2004 by the Ontario Ministry of Natural Resources. Summary of Recovery Activities At this time no specific recovery actions have been implemented for the species. The recent acquisition of the Cedar Creek site as a Provincial Nature Reserve under management of Ontario Parks will help to ensure habitat for Spoon-leaved Moss is maintained or restored according to the goals of the recovery strategy. URLs Ontario Species at Risk:http://www.rom.on.ca/ontario/risk.php?doc_type=fact&lang=&id=300