Scientific Name: Hemphillia dromedarius
Taxonomy Group: Molluscs
COSEWIC Range: British Columbia
COSEWIC Assessment Date and Status Change: May 2014
COSEWIC Status: Threatened
COSEWIC Status Criteria: B1ab(iii)+2ab(iii)
COSEWIC Reason for Designation: This relatively large slug is a member of a small group of slugs that are found globally only in western North America. In Canada, despite a great deal of searching, this species is known from fewer than 20 sites on southern Vancouver Island. There, it is restricted to moist, older-growth (>80 years old) forests. Populations are invariably small, and are fragmented by intervening logged areas and by the species’ poor dispersal ability. Threats include further loss and fragmentation from forestry and the increased frequency and severity of droughts associated with climate change.
COSEWIC History of Status Designation: Designated Threatened in May 2003. Status re-examined and confirmed in May 2014.
SARA Status: Schedule 1, Threatened
Date of Listing (yyyy-mm-dd): 2005-01-12 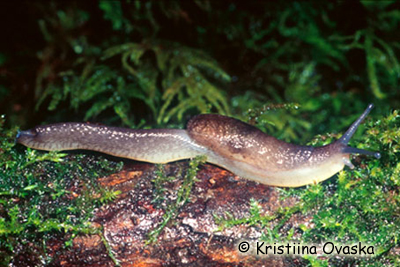 Slugs are a group of animals within the class Mollusca that share a similar body form. They usually have no external shell, but when there is one, the animal is incapable of retracting into it, as snails can.

The Dromedary Jumping-slug is about 60 mm long with a pronounced hump on its back. It is predominantly grey with darker mottling, and the underside of the foot is often bright yellow or orange. Part of the internal shell plate is visible through a slit in the skin. The tail is tipped with a distinctive horn.

The Dromedary Jumping-slug is restricted to western North America. Its range extends from Vancouver Island south to the Cascade Range and Olympic Peninsula in western Washington in the United States. In British Columbia, the Dromedary Jumping-slug is known only from seven localities on southern and western Vancouver Island. It is very possible that other sites will be found. However, the extent of the search already undertaken, in proportion to the number of sites identified, indicates that the distribution is very patchy and that the jumping-slug occurs only within a restricted range. No information is available on population size and trends; but where the Dromedary Jumping-slug occurs, densities are usually very low, with only one or two individuals found at most sites.

The Dromedary Jumping-slug’s dependency on older forests has not been established, but all known sites are in old growth or forests that contain old-growth characteristics. These sites are either on the wet west coast of Vancouver Island or at elevations above 700 metres in the southern interior of the island. Most sites contain abundant coarse woody debris, including large-diameter pieces; these pieces are thought to be important in providing refuge and egg-laying sites.

The ecology and life history of the Dromedary Jumping-slug are very poorly known. The species is hermaphroditic (having both male and female reproductive organs), and individuals lay clutches of 50 to 60 eggs in moist, rotting wood. Dromedary Jumping-slugs live more than one year; their predators include invertebrates (such as carnivorous slugs, snails, and beetles) and vertebrates (such as rodents or birds). The anti-predator behaviour of jumping-slugs is unique and consists of writhing and leaping in response to disturbance. The dispersal ability of the Dromedary Jumping-slug is probably poor, as reflected by the scattered distribution pattern of the species.

All known threats to the Dromedary Jumping-slug are associated with habitat loss, fragmentation, and degradation incurred by logging. While it may persist in some habitat remnants, the species' capacity to colonize isolated, unoccupied habitats is restricted. Habitat fragmentation also allows greater access to the jumping-slug for predators that do not live in old-growth forests. This slug may also be facing threats from predation or competition from exotic species, but more research is necessary to assess these threats.

The Dromedary Jumping-slug is protected by the Canada National Parks Act where it occurs within Pacific Rim National Park Reserve.

Summary of Progress to Date The goal of the BC (British Columbia) Terrestrial Invertebrate Recovery Team is to prevent the extirpation of the Dromedary Jumping-slug, Dun Skipper (Western population), Oregon Forestsnail, Puget Oregonian Snail, Sand-verbena Moth, Warty Jumping-slug, and Hot Water Physa and to eventually recover these species so they may become downgraded from their threatened or endangered status. Designation of Wildlife Habitat Areas under the BC Ministry of Environment’s Identified Wildlife Management Program has been a strong tool in the protection of habitat on crown land for these terrestrial invertebrates at risk. Summary of Research/Monitoring Activities Surveys have been conducted under optimal conditions to locate and inventory the Dromedary Jumping-slug and Warty Jumping-slug in key areas of their habitat. Important habitat features (elevation, biogeoclimatic ecosystem classification, forest type and age, and terrain) are recorded during the survey and recommended steps for habitat security are taken into consideration. In April 2005, information was gathered to better understand the breeding habitat and nesting areas of the Oregon Forestsnail. In areas where the snails and their nests were found, biological and environmental information was collected. Throughout 2005, other monitoring activities were documented, including juvenile habitats, seasonal migration and dispersal (using Global Positioning Systems and Global Information Systems), and predator interactions with the snails. Students have been involved in Oregon Forestsnail research since 2002. They have estimated population sizes through mark and recapture studies and investigated the vegetation preferences of the snails. Currently, there is an over-wintering habitat and long-term population dynamics study underway. In 2000, the population of Hotwater Physa was surveyed and potential management issues and recommendations were identified. Summary of Recovery Activities Public outreach and stewardship programs are raising awareness of all BC terrestrial invertebrates and their habitats. A public education program will help to promote awareness of these species at risk. Trinity Western University has featured a story and a photo of the snail in its alumni/supporter magazine and on its website. URLs Trinity Western University:http://www.twu.ca/news/view-specific.aspx?newsID=424 COSEWIC Assessment and Status Report on the Oregon Forestsnail:http://www.sararegistry.gc. ca/virtual_sara/files/cosewic/sr_oregan_forestsnail_e.pdf COSEWIC Assessment and Status Report on the Dromedary Jumping-slug:http://www.sararegistry .gc.ca/virtual_sara/files/cosewic/sr_dromedary_jumping_slug_ e.pdf