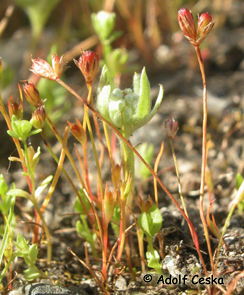 Kellogg’s Rush is an inconspicuous annual herb that grows to heights of 0.4 to 4 cm from a short fibrous root. The leaves are bristle-like and grow from the base of the plant. The reddish-brown flowers are mostly single or in clusters of two, and are produced at the end of a leafless stem. The seeds are 0.4 mm long and barrel-shaped.

The Kellogg’s Rush is found sporadically in California, Oregon, and Washington in the United States. The only known Canadian occurrence is an isolated population on southeastern Vancouver Island in British Columbia. Observations made in 2001 revealed that the total population at the known Canadian site is likely fewer than 600 plants and occupies an area of less than 25 m². This population has remained relatively stable over the 15-year period since it was found, but undergoes extreme yearly fluctuations depending on seasonal precipitation.

The Kellogg’s Rush requires seasonally wet depressions and temporary pools that are moist to wet in winter and spring and dry in summer. Suitable conditions usually occur in low spots in fields and meadows within Garry Oak habitat.

The ability of the Kellogg’s Rush to survive in a habitat that is very wet in the spring and then dries out completely in summer potentially decreases competition from other species. The Kellogg’s Rush is generally self-pollinating and each seed capsule contains about 50 seeds. Germination experiments conducted on a closely related species indicate that not all seeds germinate in the same year, suggesting that Kellogg’s Rush seeds can survive unfavourable years. The seeds are also known to be able to withstand periods of drought.

Any activity altering the level of water at the site is a potential threat to this species. The only known population occurs in an open area of nationally rare Garry Oak habitat, in a municipal park that is heavily used by walkers and bicyclists, and therefore threatened by trampling and park development. The municipality does not have a management plan for the Kellogg’s Rush in the park and has been engaging in activities on and around the site that, if escalated, could threaten the population.