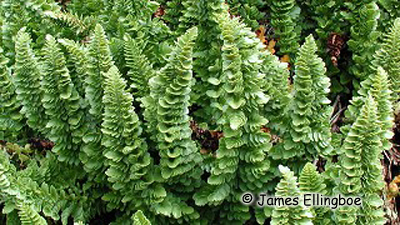 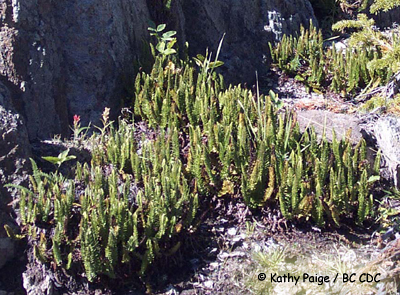 The Lemmon's Holly Fern is an evergreen perennial that keeps its fronds (compound leaves) for at least 12 months — usually until the new growth has begun. The fronds are 10 to 40 cm long and 3 to 7 cm wide, with 20 to 35 oval pinnae (leaflets) on either side.

Restricted to western North America, the Lemmon’s Holly Fern occurs sporadically from south central British Columbia south to Washington and Oregon in the United States. Its main range is in southern Oregon and northern California. In Canada, a single isolated population is known from the Baldy Mountain area on the eastern side of the Okanagan Valley in British Columbia. A 2001 count revealed a total of 853 plants over 2.4 ha; the population contained numerous younger plants that appeared vigorous. A collection made in 1987 mentions a population size of “perhaps a thousand plants” — indicating that the population has remained relatively stable for at least the last 15 years.

Lemmon's Holly Fern grows within a highly restricted area of specialized habitat where there is shallow soil, rich in heavy metals, over serpentine bedrock. These basic soils support a very sparse groundcover, and are treeless and dry, contrasting sharply with the surrounding montane forests.

Plants adapted to the habitat preferred by Lemmon's Holly Fern are able to tolerate low levels of calcium, nitrate, phosphorous, and molybdenum and high levels of magnesium, chromium, and nickel. Ferns in this family are known to reproduce sexually, by producing spores, and also vegetatively, by spreading underground stems (rhizomes). The site in British Columbia is on dry, rapidly drained soil that is not conducive to spore germination. It is likely that most of the growth here is vegetative, and that there are large clumps of genetically identical individuals.

There are no imminent threats to this population of Lemmon's Holly Fern. The most serious potential threats are mineral extraction and quarrying of gravel for road construction, which could destroy the rock outcrops to which the fern is restricted. Due to its limited range, the fern is also vulnerable to chance events.

The Lemmon's Holly Fern population in British Columbia is on public land, but the land is not part of a protected area.

Team for the Lemmon's Holly Fern