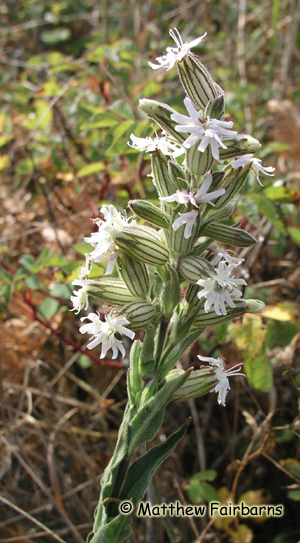 The Coastal Scouler’s Catchfly is distinct from other species within its habitat, even when it is not in flower. It is an upright perennial herb that grows to heights of 15 to 80 cm. The leaves at the base of the plant are hairy, 6 to 20 cm long, up to 1.5 cm wide, and encircle the stem. Further up the stalk the leaves occur in pairs. The Coastal Scouler’s Catchfly grows in clumps and each flowering plant produces a spike-like flower stalk. The flowers, arranged in an elongated manner on the stalk, are greenish-white to purple. The fruits are oblong capsules containing grayish-brown, 1-mm-long seeds.

The Coastal Scouler's Catchfly is restricted to western coastal North America. It is found in coastal areas from extreme southern British Columbia to the San Francisco Bay area of California in the United States. In Canada, it is limited to three small islands close to Victoria on Vancouver Island. Of the approximately 12 populations of the Coastal Scouler’s Catchfly that once occurred, only two remain. Their combined total population is less than 350 plants.

A habitat specialist, Coastal Scouler's Catchfly is restricted in Canada to the lowland Coastal Douglas-fir zone, in areas that are wet in winter and dry in summer. The Coastal Scouler's Catchfly prefers grassy openings on gently sloping sites along the coast, locally referred to as maritime meadows. It is absent from shrub thickets and from patches of introduced robust grasses. Sites that formerly supported this perennial plant were probably burned frequently by First Nations communities seeking to improve production of camas (a native lily) on adjacent uplands.

Catchflys get their name from the sticky hairs on the plants that often trap flies and other small insects. There is little information available on the biology or ecology of the Coastal Scouler's Catchfly in British Columbia. It is a tap-rooted perennial species with a shallowly buried plant base that gives rise to multiple stems — creating clumps of genetically identical individuals. Coastal Scouler’s Catchfly is likely pollinated by insects. The plants on Trial Island have been known to produce mature seeds in late September or October. Coastal Scouler's Catchfly has limited seed production, and the seeds lack any special adaptations for long-distance dispersal. The localized distribution of this plant, and the well-documented history of populations in the area, also suggests that the establishment of new populations is rare. Studies of other plants in the same genus as the Coastal Scouler's Catchfly revealed that individuals can reappear after a period of dormancy (regenerating from desiccated stems), and that their seeds must be exposed to a period of cold weather before they will germinate.

Habitat destruction was the major cause of the decline of this species. The remaining populations are threatened by habitat degradation. Fire has been almost completely suppressed for several decades, favouring the growth of introduced shrubs and native woody species; no weed control strategies have been developed on the islands. Both populations are also at risk from potential marine pollution as they grow close to the intertidal zone of one of the most active oil shipping lanes in North America. Trail maintenance, including mowing and herbicide use, threatens some plants. Trampling by staff working at facilities on the islands and recreational kayakers may also be a risk.