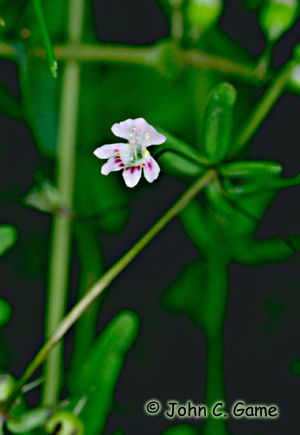 The Small-Flowered Tonella is a slender, delicate plant (as its French common name suggests). It is a sprawling, annual herb that sometimes ascends toward the tip and swivels on a fine taproot. The stems are hairless, often branched, and reach a height of 5 to 25 cm. The leaves are smooth or covered with soft short hairs on the upper surface and are arranged in opposing pairs along the stem. The lowermost leaves are rounded and slightly toothed. They are 1 to 2 cm long and have a small stalk called the petiole. The middle and upper leaves have three deep lobes that become narrower toward the top of the plant. The petioles become gradually shorter until they are completely absent on the small, smooth-edged, uppermost leaves. The flowers, which are blue and white and 2- to 4-mm wide, are on long stalks with few or no hairs. They occur singly or in groups at the angle of the bracts (the small leaves that accompany them). The corolla, or whorl composed of all the petals, forms two lips inserted into a short tube. The upper lip is two-lobed and the lower lip is three-lobed, with the middle lobe being larger than the two others. The calyx, composed of the sepals or small leaves at the base of the flower, is up to 3 mm long, longer than the tube of the corolla, and deeply five-lobed. The four stamens are protruding, and the fruit are dry ovate to globe-shaped capsules containing two to four wingless seeds 1 to 1.5 mm long.

The main distribution range of the Small-Flowered Tonella is in the United States, extending from the Columbia River gorge in southern Washington southward through Oregon into central California. In Canada, the species is found only on the west side of Saltspring Island in the Gulf Islands of southwestern British Columbia. This location is disjunct from the main range of this annual herb. In 2002, four small sub-populations of Small-Flowered Tonella were observed on Saltspring Island, on the slopes of a mountain where another sub-population had been observed in 1976 but not relocated since. Each of these sub-populations comprised 30 to 150 plants and occupied an area ranging from 1 m² for the smallest to approximately 40 m² for the largest. The total population comprises approximately 230 to 315 plants and occupies a total area of 65 m². The lack of data makes it impossible to detect the trend for this population. Other habitats that might shelter it have been explored, but without success. Because this plant is inconspicuous and very hard to spot, it is quite likely that other sub-populations do occur on this slope.

In British Columbia, the Small-Flowered Tonella occurs on west-facing slopes, on gravelly outcrops or stable talus. It is also found in open bigleaf-maple-arbutus forests and in open Douglas-fir-arbutus-Garry oak forests.

Little information is available about the biology of the Small-Flowered Tonella. This herbaceous plant is an annual known to be capable of self-pollination, meaning that the plant can fertilize its flowers with its own pollen and, consequently, does not need neighbouring plants to reproduce. In the Small-Flowered Tonella, as in other small-flowered species, the tips of the pollen-bearing anthers come in contact with the stigmas (the part of the female reproductive organ of the flower where the pollen germinates) as soon as the flower begins to open. In this way, the plant can self-pollinate without waiting. The stigma are soon ready to receive the grains of pollen that fertilize the flowers. The fertilized flower turns into a small dry fruit containing two to four seeds. These seeds become sticky when wet and are probably dispersed by animals. The persistence of the Small-Flowered Tonella in British Columbia demonstrates that its seeds are viable and germinate readily. At low elevations, the plant is also pollinated by several insect species, including bumblebees.

In British Columbia, the most immediate threat to the Small-Flowered Tonella population is habitat loss due to residential construction along the coast. The only site where the species occurs is on private waterfront property in an area where such property is the most highly prized. If this property were to be developed, the plant’s habitat would probably be reduced or completely destroyed. The loss of this site would thus mean the disappearance of this species from British Columbia and from Canada. Fires could also affect the survival of the Small-Flowered Tonella. The vegetation in the area where this species grows would be maintained by the natural pattern of fires of natural and human origin. The absence of fires allows combustible materials to accumulate, and a fire under these conditions would prove devastating. The drought conditions prevailing in British Columbia over the past few years have caused numerous fires. A fire occurring at the plant’s Saltspring Island site could wipe it out completely. The presence of exotic species also constitutes a threat to the Small-Flowered Tonella. The vegetation in the area where this species occurs is heavily dominated by introduced grasses.

The Small-Flowered Tonella is not protected by any provincial laws in British Columbia.