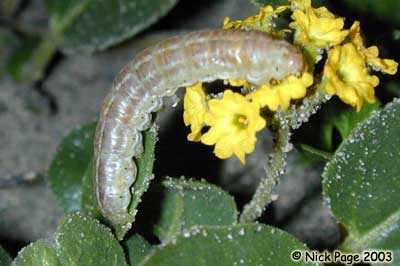 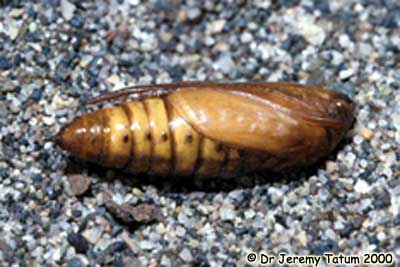 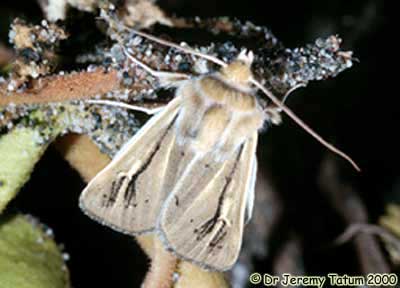 The Sand-verbena Moth is an average-sized nocturnal moth. It ranges in colour from dark to golden brown and has a wingspan of 3.5 to 4.0 cm. The forewings are 17 to 19 mm in length; they are slightly darker than the thorax and have distinctive black and light yellow lines. They are white near the thorax with a brown-grey border towards the bottom. The hindwings are a dark greyish brown, becoming very pale grey or white near the body. Wing pigmentation can present slight variations from one individual to the next and from one region to the next. Males and females are similar in colour, size, and wing patterning. Young caterpillars are green with pale stripes and turn brown as they age. Adults emerge from a dark-brown pupa that measures approximately 2 cm in length and is protected by a flaky layer of fine sand. No other species in British Columbia resembles the Sand-verbena Moth. Consequently, the adult can be reliably identified through observation of such characteristics as forewing patterning. 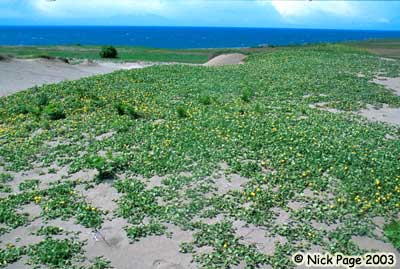 The Sand-verbena Moth can be found from the sandy coasts of southwestern British Columbia in the north, and southward to Puget Sound in Washington State in the United States. This moth has been observed in three Canadian sites, all of which are located in southwestern British Columbia. Two populations were discovered on the northern edge of the Strait of Georgia in the Comox region. The third population is in the southern part of the Georgia Strait near Sidney. Based on the distribution of the host plant (Yellow Sand Verbena), it has been determined that other populations could be present along this same stretch of the Strait of Georgia. However, no Sand-verbena Moths have been captured or observed in the few sites that have been sampled so far. The number of individuals that make up the three Canadian populations is not known. Changes in the distribution and abundance of their host plant (Yellow Sand Verbena) could provide valuable information on population trends for this species. Globally, population numbers for this nocturnal moth species are extremely low. Each of the eight sites where the Sand-verbena Moth has been observed appears to be home to a distinct population.

These nocturnal moths fly at dusk and in the early evening from mid-May to early July. Adults appear to live 5 to 14 days. They feed on the nectar of the Yellow Sand Verbena, which they drink with their long proboscis. Very little is known about the reproduction of the Sand-verbena Moth. However, the mating period is known to peak in mid-June, after which the females lay their eggs, alone or in clusters, on the leaves and flowers of the Yellow Sand Verbena. Eggs hatch approximately two weeks after laying and young caterpillars immediately begin to feed on the leaves of the plant. They continue to feed at night through July and August. The caterpillars winter in a dormant state nestled in the sand beneath the host plants. The following spring, from late April to late May, they metamorphose into pupae. Adult moths emerge from the pupae approximately 10 days later. The Sand-verbena Moth is dependent on the Yellow Sand Verbena throughout every stage of its life. Not only is this flowering plant its sole source of food; the moth also depends on it for reproduction. Such highly dependent relationships are not uncommon among nocturnal moths. However, the extremely specialized habitat requirements shown by both of these species increase the moth's vulnerability.

The main threat to the Sand-Verbena Moth is the reduction in abundance and quality of its host plant due to the degradation of open, sandy habitats (such as coastal dunes) caused by the invasion of vegetation, a natural phenomenon that is occurring at a faster rate due to the introduction of invasive exotic species. In addition, the use of dunes for recreational purposes poses a secondary threat, which could become more significant at the local level. Other factors that threaten the Sand-verbena Moth include a natural pesticide used to control various moth and butterfly pests. Unfortunately, this product also affects non-targeted species, including the Sand-verbena Moth. Finally, climate change poses a potential threat as rising sea levels and global warming could lead to the disappearance of the Sand-verbena Moth's habitat.