Scientific Name: Eremophila alpestris strigata
Other/Previous Names: Horned Lark strigata subspecies
Taxonomy Group: Birds
COSEWIC Range: British Columbia
COSEWIC Assessment Date and Status Change: April 2018
COSEWIC Status: Endangered
COSEWIC Status Criteria: B1ab(iii)+2ab(iii); D1
COSEWIC Reason for Designation: This songbird is restricted to the Pacific coastal plains of western North America and is globally at risk. It is dependent on open natural or anthropogenically modified, sparsely vegetated grasslands or other areas with bare ground. It was last confirmed breeding in Canada in 1978, with the most recent indications of potential breeding in 2002; the current Canadian population is likely zero. However, the  subspecies breeds in Washington State and patches of potentially suitable habitat remain on Vancouver Island and in the lower Fraser River Valley in British Columbia, although these continue to decline in both extent and quality. The primary threats to this subspecies in Canada are habitat loss and degradation due to urban development, intensified agricultural practices, invasive plant incursions, coastline management activities, and recreational disturbance.
COSEWIC History of Status Designation: Designated Endangered in November 2003. Status re-examined and confirmed in April 2018.
SARA Status: Schedule 1, Endangered
Date of Listing (yyyy-mm-dd): 2005-07-14 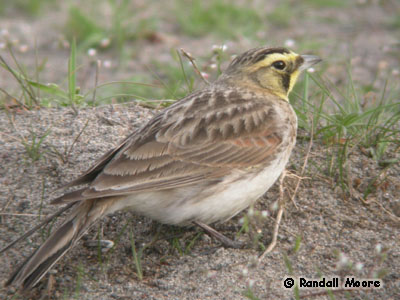 The Horned Lark strigata subspecies is the rarest of the eight subspecies living in Canada.

The Horned Lark strigata subspecies is a small, slender, brown bird with long wings. Its throat and the band above its eyes are yellow. Its back and nape are dark brown, its underparts are yellowish, and its sides are marked with wide brown streaks. Its beak is short and strong, and its square, black-edged tail is visible even in flight. This bird can be distinguished by the black headband and the black, arc-shaped sideburns on either side of its face. In the male, the black headband extends into two tiny feather tufts that are visible only close up. The tufts resemble horns, hence the name “Horned Lark,” as this species is sometimes called. The adult female resembles the male but is smaller and duller in appearance.

In North America, the Horned Lark strigata subspecies occurs in the coastal plains of Oregon and Washington and north into southwestern British Columbia. In this province, the bird is present only on southeastern Vancouver Island and in the lower Fraser River Valley, from the mouth of the river east to Chilliwack. The Canadian population is estimated to consist of one to five birds only. In 2002, a single male was observed on southern end of Vancouver Island. Before that sighting, the Horned Lark strigata subspecies was believed to have disappeared from the island completely and to be extremely rare in the lower Fraser River Valley. Except in the 1920s and 1930s, when the populations are believed to have peaked, this subspecies has never been abundant in British Columbia. Over the 1980s, the populations began to decline to the point of extirpation. The United States populations are also declining or on the verge of extirpation; it is estimated that only 300 to 500 of these birds remain in Oregon and Washington.

Like all Horned Larks, the strigata subspecies prefers open areas with short, sparse vegetation. In British Columbia, its habitats include landing strips, cropland, pastures, playing fields, roadsides and natural areas such as sand dunes, beaches and other shoreline areas. These sparsely vegetated natural ecosystems are the rarest in this region. The bird breeds only in short-grass fields found in agricultural land, at airports and in estuaries, as well as on sparsely vegetated sandy beaches along the lower Fraser River. The last known breeding site was at the Vancouver International Airport and was reported in 1981.

The Horned Lark strigata subspecies is believed to be monogamous during the breeding season, but it is not known whether the pair maintains a bond for the rest of the year. The male typically arrives at the breeding ground first and establishes a breeding territory. When the female arrives, she selects a male and then looks for a nest site within his territory. The site will be on the ground, near a tuft of vegetation or small object. It may consist of an existing depression, or the female may scrape a small hollow in the ground. She then lines the hollow with fine grasses and other plant fibres. In general, the female lays four eggs and incubates them for 11 or 12 days. It is not known whether the bird lays more than one clutch per year. The female looks after the nestlings and, with help from the male, feeds them while they are in the nest. About 10 days after they hatch, the young leave the nest for the first time, before they can even fly. As with many other grassland bird species, the young do not stay in the nest for very long. In British Columbia, the breeding season runs from early April through late August. Outside the breeding season, the bird feeds primarily on seeds. In spring and summer, it also eats invertebrates and feeds them to its nestlings. In fall, the populations on the British Columbia coast may migrate southward to Washington and Oregon, but a few birds have been observed to overwinter in the region. Horned Larks tend to nest away from urban landscapes and tolerate grazing livestock and occasional operation of machinery; however, the nests may be destroyed when fields are mowed, or they may be crushed by other vehicles, as often happens at airfields. The survival rates for the young and for adults are not known, but nest failure may be attributed to such accidental destruction of nests, in addition to predation and bad weather.

The scarcity of habitats and the disappearance of former habitats constitute the primary threats for the strigata subspecies. Most of the suitable habitats along the British Columbia coast have now been developed for human activities, such as housing, recreation, agriculture and light industry, none of which is compatible with a ground-nesting bird. In future, development projects will continue to exert pressure on the environment and will likely destroy most of the remaining natural habitats. In the Fraser River delta, the building of dykes to regulate water levels has reduced the amount of sparsely vegetated, sandy shoreline area along the river, and invasive exotic plants have become established in most of the dunes and fields that remain. This bird will likely be subjected to additional pressure by the growing use of chemicals and increased predation by the domestic cats and wild animals that live in urban areas. In addition, given the decline in the neighbouring populations in Washington and Oregon, there is little hope that any of these birds will disperse and re-establish the populations in British Columbia.

The Horned Lark strigata subspecies is protected by the federal Migratory Birds Convention Act, 1994, which makes it illegal to possess migratory birds or their nests. This subspecies is also protected by British Columbia’s Wildlife Act, which prohibits hunting, trapping, poisoning or any other method of destroying wildlife, or disturbing or destroying eggs or nests. Some old breeding sites are protected within regional parks on Sea Island and Iona Island.