Scientific Name: Hesperia dacotae
Taxonomy Group: Arthropods
COSEWIC Range: Saskatchewan, Manitoba
COSEWIC Assessment Date and Status Change: May 2014
COSEWIC Status: Endangered
COSEWIC Status Criteria: B2ab(i,ii,iii,iv,v)
COSEWIC Reason for Designation: This butterfly is dependent on tall-grass and mixed-grass prairie habitats, which have suffered > 99% historical losses since the 1850s. The species occurs within fragmented patches of habitat in three population centres in Canada. It has a small home range and is associated with specific prairie plants, making it sensitive to conversion of prairie remnants to cropland, spring and summer haying, overgrazing, controlled burns, drainage of natural sites, and natural disturbances such as floods. The long-term persistence of this butterfly is dependent on appropriate management of its habitat, most of which consists of small fragments.
COSEWIC History of Status Designation: Designated Threatened in November 2003. Status re-examined and designated Endangered in May 2014.
SARA Status: Schedule 1, Endangered
Date of Listing (yyyy-mm-dd): 2005-07-14 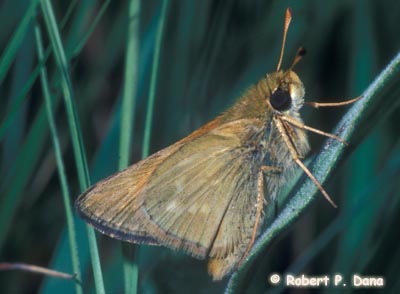 Dakota Skipper (Hesperia dacotae) is a small (21-33 mm) butterfly. The dorsal wing surfaces of females vary in colour from grayish-beige to brown, suffused with differing amounts of orange and paler translucent spots on the forewing. Wing undersides are greyish-brown with obscure pale spots on the hindwing, and are considered diagnostic for the species. Male dorsal wing surfaces are tawny orange with narrow, diffuse brownish borders and a distinct dark marking on the forewing. The underside of males is often a dull yellowish-orange with poorly developed pale spots. Dakota Skipper is one of a small group of habitat specialist butterflies that ranges in native tall-grass and mixed-grass prairie habitats that remain in small isolated pockets in Canada. The loss of this skipper from Canada would represent the loss of a significant species of this endangered prairie ecosystem. (Updated 2017/07/21)

Dakota Skipper has one generation per year. Individual adults live up to three weeks, but populations are active for a three- to five-week period during late June to mid-July. Adult females mate within one or two days following emergence and immediately begin laying eggs. Eggs are typically laid individually on the undersides of leaves of the larval host plants. (Updated 2017/07/21)

The predominant threat to Dakota Skipper is increased frequency and severity of flooding that partially affects parts of this low-relief habitat at all three population centres. Historically, prairie ecosystems experienced periodic natural flooding; however, the present-day remaining habitat patches are no longer interconnected, preventing recolonization between these periodically flooded sites. This factor, combined with the cumulative threats that include conversion of habitat to non-grassland farming (e.g., agricultural intensification), overgrazing, haying, mining operations, native and non-native vegetative succession, wildfires and fire suppression and pest control, is causing further declines. (Updated 2017/07/21)

Summary of Progress to Date There has been no known change in the Dakota Skipper population. Summary of Research/Monitoring Activities The monitoring and surveying of species at risk habitat, including that of the Dakota Skipper, is ongoing in Manitoba. Summary of Recovery Activities Conservation agreements with landowners are being established to secure native habitat of species at risk within the prairie grasslands of Manitoba. Saskatchewan continues to encourage and support habitat stewardship initiatives that contribute to the recovery of the species. The collection of baseline information helps to design protocols for identifying and protecting the critical habitat. Issues of overgrazing and burning are addressed in a manner that would best protect the Dakota Skipper. Rotational grazing creates areas of mixed vegetation structure preferred by this species and early spring burning would benefit the Dakota Skipper by increasing nectar plant density and reducing higher levels of litter. URLs Government of Canada: Dakota Skipper:http://www.cbif.gc.ca/spp_pages/butterflies/species/DakotaSkipper_e.php