Scientific Name: Oarisma poweshiek
Taxonomy Group: Arthropods
COSEWIC Range: Manitoba
COSEWIC Assessment Date and Status Change: November 2014
COSEWIC Status: Endangered
COSEWIC Status Criteria: B1ab(iii)+2ab(iii); C2a(i)
COSEWIC Reason for Designation: The Canadian population is isolated and disjunct from the populations in United States which are 1000 km to the south.  Widespread declines within the past decade on both sides of the border mean Canada holds a significant portion of the species global range. Within Canada this species is restricted to native tall-grass prairie, a habitat that has also undergone similar declines. Although most of the occupied habitat is protected, even with appropriate management, its range is so small that the butterfly is increasingly vulnerable to stochastic events.
COSEWIC History of Status Designation: Designated Threatened in November 2003. Status re-examined and designated Endangered in November 2014.
SARA Status: Schedule 1, Endangered
Date of Listing (yyyy-mm-dd): 2005-07-14 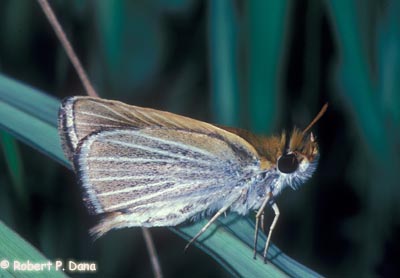 The Poweshiek Skipperling is a small brown butterfly with a wingspan of 24 to 30 mm. Males and females have similar coloration. The upper side of the wings is dark brown with orange along the wing margin and base. The underside of the front wing is a distinctive dark brown, with orange areas along the front margin contrasted with white veins and white over-scaling on the hindwing. Eggs are pale yellowish-green, 0.7 mm in length, and have a slightly elliptical shape. Caterpillars are light green with a dark green stripe on the top, bordered by white on either side. They have six white-to-cream-coloured stripes, and an average length of 24 mm.

The Poweshiek Skipperling has a very limited and highly fragmented distribution in North America. It occurs in the United States in only one area in Michigan and Iowa, and a number of isolated sites in western Minnesota. In Canada, it is found only in southeastern Manitoba, in a 2300-ha area near Tolstoi, Stuartburn, and Gardenton. Populations of Poweshiek Skipperling are estimated to be in the range of 5 000 to 10 000 adults; however, no detailed or long-term population trends are available.

The Poweshiek Skipperling is found only in the native tall-grass prairie of southeastern Manitoba, consisting of both wet and dry habitats, each with a distinctive plant community used by the butterfly at different life stages. The Poweshiek Skipperling caterpillar feeds on Slender Spike Rush, a host plant found in the wetter areas. The adult feeds on the nectar of a variety of flowering plants, including Black-eyed Susan, that grow in the drier sections.

The adult Poweshiek Skipperling is active for only about three to four weeks, usually from late June to mid- or late July, with peak numbers of adults usually during the second week of July. The female lays eggs on host plants such as Slender Spike Rush and other sedges, which hatch in 9 to 10 days. Caterpillars feed on the leaves of the host plant, and rest on the underside of the grass stems. The Poweshiek Skipperling goes through seven larval stages (instars), and overwinters in the leaf litter of the host plant. It emerges in spring to feed and form a chrysalis. The adult emerges in late June or July; there is only one generation per year.

The Poweshiek Skipperling is presumed to be in decline as a result of the conversion of tall-grass prairie habitat into agriculture. Over 99.5% of the native prairie habitat in Manitoba has been converted to agricultural row crops or hay fields, habitats unsuitable for this skipper. Overgrazing and haying (depending on the time of year) eliminate both adult nectar sources and larval food plants. Other threats include controlled burning (depending on timing and intensity), succession, exotic species, and habitat fragmentation.

The habitat of most populations is protected in the Tall-grass Prairie Preserve established through the federal Critical Wildlife Habitat Program. A few additional sites outside the preserve are on privately owned land.

Summary of Recovery Activities The Nature Conservancy of Canada-Manitoba is restoring natural Poweshiek Skipperling habitat by controlled burns and selective mowing to remove invasive species. Ecologically sensitive land is being secured through purchase, donation, and conservation easements which will target areas with species at risk such as the Poweshiek Skipperling.