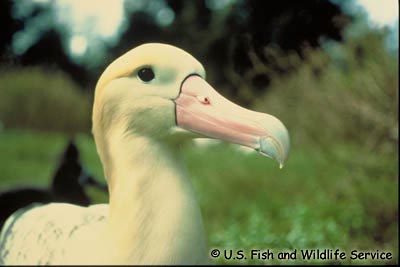 The Short-tailed Albatross is a large-bodied seabird with long, narrow wings specially adapted for extended soaring flights over the ocean surface. It is the largest of the North Pacific albatrosses and, when mature, is the only white-bodied albatross of the region. This seabird has a distinctive large, pink, hooked bill with a bluish tip. The adult has a white back, pale yellow head and neck, black wing tips and tail fringes, and pale legs and feet. Both males and females share the same coloration; there is no seasonal difference in plumage. Adults range in length from 84 to 94 cm, with wingspans of 213 to 229 cm. Breeding females produce one egg per year. First-year birds are entirely chocolate brown, and full adult plumage is attained only after 12 to 20 years of age.

The Short-tailed Albatross now breeds on only two islands south of Japan. The marine range of the Short-tailed Albatross extends from Siberia south to the China coast, into the Bering Sea and Gulf of Alaska, south to Baja California, and through the North Pacific, including the northwestern Hawaiian Islands. In Canada, the species occurs only off the coast of British Columbia, where it has been observed in every month other than December. Short-tailed Albatross populations once numbered in the millions, but over-exploitation at its breeding colonies in the early 20th century reduced the species to near extinction. Currently, the global population is estimated to be about 2,130 birds. Protection and conservation efforts are helping the population to increase. Since 1996, 34 Short-tailed Albatrosses have been observed in or within 50 km of Canada's Exclusive Economic Zone.

The Short-tailed Albatross breeds in colonies, nesting on isolated, windswept, volcanic offshore islands where human access is limited. These birds seem to prefer level, open areas near tall clumps of grass. Nests are scooped out of the ground and are usually lined and built up with grass. Little is known about the Short-tailed Albatross’s marine habitat requirements, especially those surrounding the breeding colonies. At-sea observations and recent satellite tracking studies indicate that Short-tailed Albatrosses are associated with the outer continental shelf and upper slope waters; marine habitats that are characterised by upwelling and high biological productivity.

The Short-tailed Albatross is a pelagic seabird, which means it spends most of its time at sea, returning to land only to breed. The Short-tailed Albatross is monogamous (one mate for life), and most adult birds with surviving mates breed every year. Birds that lose a mate may take two years or more to establish another pair bond and breed again. Pairs return to the same nest sites year after year, and birds hatched at one colony generally return to that same colony to breed. Adults start to arrive at the colony in October to begin nest building. It is estimated that the Short-tailed Albatross breeds at six years of age, with egg-laying occurring in late October to early November. A single egg is laid, and both the male and female share in incubation. Eggs hatch in 64 to 65 days, in late December to early January. Chicks are almost full grown by late May or early June, and adults start to leave the colony at that time. Chicks fledge soon after the adults have left, and return to the colony two to five years later as non-breeders. After the breeding season, birds disperse north to the Aleutian Islands and the Bering Sea. Immature birds and some adults as well, disperse to the eastern and northern regions of the Pacific Ocean. The Short-tailed Albatross, like other species of albatross, matures slowly and is a very long-lived bird. It is estimated there is one generation every 26 years. The Short-tailed Albatross feeds at the ocean surface, mainly at night. It feeds on squid, fish, flying fish eggs, shrimp, and other crustaceans. The Short-tailed Albatross is known to follow fishing vessels and feed on discarded bait. During breeding, it may forage up to hundreds of kilometres away from the colonies. The bones of Short-tailed Albatrosses have been found in middens from St. Lawrence Island to California, suggesting that this species represented an important and abundant food source to the Native people of the west coast of the Pacific.

Throughout its range, the Short-tailed Albatross is vulnerable to becoming entangled in lost or abandoned fishing gear or caught incidentally in groundfish longline fisheries. Canadian threats include potential interactions with commercial longline or gillnet fisheries, oil pollution, the ingestion of plastics, and the bioaccumulation of heavy metals and other pollutants. The potential interactions with the commercial fishing industry include incidental take during fishing, and injury or entanglement in discarded nets and lines. Offshore oil and gas activities pose a potential threat, and proposed offshore wind farms potentially may degrade or prevent access to important foraging areas. Climate change poses a potential threat.

The Short-tailed Albatross is also protected under the Migratory Birds Convention Act, and the British Columbia Wildlife Act.

Summary of Progress to Date A draft recovery strategy is about to be posted on the SARA Public Registry.Summary of Research/Monitoring Activities The Canadian Wildlife Service routinely conducts at sea Ship-of-Opportunity surveys (aboard Coast Guard vessels) to monitor abundance, distribution, and seasonality of pelagic seabirds off the west coast of Canada. Those data, spanning more than 18 years, are being analyzed and will be used to produce an atlas of the seasonal distribution of all pelagic seabirds off Canada’s west coast, including the Short-tailed Albatross. Satellite telemetry studies are elucidating movement patterns of Short-tailed Albatrosses during the breeding and non-breeding seasons, including in Canadian waters. Summary of Recovery Activities A database of all known sightings of Short-tailed Albatrosses in Canadian and adjacent waters has been created and a map has been produced. URLsEnvironment Canada Species at Risk website:http://www.speciesatrisk.gc.ca/search/sp eciesDetails_e.cfm?SpeciesID=797Government of Canada Species at Risk Public Registry:http://www.sararegistry.gc.ca/status/showDocument _e.cfm?id=443COSEWIC webpage:http://www.cosewic.gc.ca/eng/sct1/searchdetail_ e.cfm?id=797&StartRow=1&boxStatus=All&boxTaxonom ic=All&location=All&change=All&board=All&com monName=Short-tailed%20Albatross&scienceName=&return Flag=0&Page=1