Scientific Name: Cirsium hillii
Taxonomy Group: Vascular Plants
COSEWIC Range: Ontario
COSEWIC Assessment Date and Status Change: November 2004
COSEWIC Status: Threatened
COSEWIC Status Criteria: Met criterion for Endangered, C2a(i), but designated Threatened, C2a(i); D1, because the species is not at imminent risk of extirpation due to the occurrence of numerous sites, some in protected areas.
COSEWIC Reason for Designation: This is a perennial herb restricted to the northern midwestern states and adjacent Great Lakes that is found in open habitats on shallow soils over limestone bedrock. In Ontario, it is found at 64 extant sites but in relatively low numbers of mature flowering plants that are estimated to consist of fewer than 500 individuals. Some populations are protected in national and provincial parks, however, the largest population is at risk from aggregate extraction. On-going risks are present from shoreline development, ATV use, and successional processes resulting from fire suppression within its habitat.
COSEWIC History of Status Designation: Designated Threatened in November 2004.
SARA Status: Schedule 1, Threatened
Date of Listing (yyyy-mm-dd): 2006-08-15 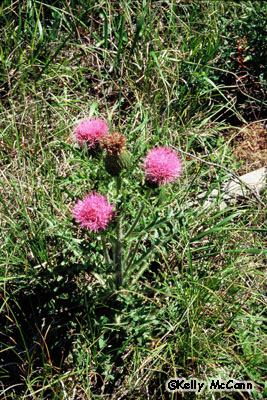 Hill's Thistle is a perennial herb measuring 25 to 60 cm in height. Stems are soft and ridged with a more or less thin covering of hairs. They bear a few leaves, which become progressively smaller nearer the tip. Although the leaves are often smooth, the undersides may be sparsely covered in woolly hairs. The leaf margins are typically undulated. One or two short branches develop near the top of the stems. Each branch bears one or several large heads measuring 3.5 to 5 cm in diameter with several tightly grouped small flowers. The flowers are deep pink to purple and, occasionally, white. At the base of the plant, there is a rosette of long elliptic leaves with rounded edges.

Hill's Thistle is native to North America and occurs primarily in the Great Lakes area. It can be found from southern Ontario to Michigan, Wisconsin, Minnesota, Iowa, Illinois and Indiana. In Canada, Hill's Thistle is limited to southern Ontario, where there are 70 documented sites. Most of these sites are on the shores of Manitoulin Island, located in the northern part of Lake Huron, and on the west shore of the Bruce Peninsula. It is likely that six of these sites have disappeared. Mature flowering plants occur in relatively low numbers in the 64 confirmed Ontario sites. The Canadian population of mature plants capable of reproducing is estimated at fewer than 500 individuals. Since virtually all the surveys were conducted between 1995 and 2003, it is impossible to identify long-term trends for this population. While the largest populations are all likely known, there may be other significant, as yet undiscovered populations in other locations.

Hill's Thistle grows in a variety of open, dry, sandy and fire-prone environments. Such environments include grasslands covering gravel hills or escarpments, dry sandy grasslands, oak-pine barrens, dunes, oak savannahs and open woods. In Ontario, this species grows primarily in alvar grasslands; these habitats are characterized by limestone outcrops, shallow soil and sparse vegetation. Hill's Thistle often shares these environments with other herbaceous species, particularly Poverty Oat-grass and Bearberry, under a forest cover of Jack Pine, White Spruce, and Eastern White Cedar. The shoreline alvars of Manitoulin Island, neighbouring islands and the western shores of the Bruce Peninsula are vital to the long-term survival of Canadian Hill's Thistle populations.

Little is known about the biology of Hill's Thistle. However, it is known to be a perennial plant with a short lifespan; it typically lives two or three years, rarely living more than four or five. Although flowering can occur one or two years after the establishment of the basal leaf rosette, Hill's Thistle typically flowers in its third year. This species can reproduce vegetatively through new rosettes that emerge from buds that form on some roots. In Ontario, this perennial blooms from mid-July to late August and its flowers are pollinated by bees. The plant typically produces a large quantity of seeds that are disseminated by the wind. It is believed that an overly dense layer of vegetation on the ground could hinder germination. The main factor that limits this species’ ability to reproduce appears to be the increase of the surrounding forest cover and the resulting decrease in available light. Flowers and seeds are vulnerable to insects and perhaps fungi.

While there are a number of factors that limit the Canadian population of Hill's Thistle, the most significant factor is the severely limited size of the alvars where this species grows. These open environments are among the most threatened in North America and Ontario. What is left of these environments is being lost to the succession of vegetation that occurs naturally. In the absence of natural events such as fire that serve to keep these environments open, these areas are becoming less and less suitable habitats for Hill's Thistle. The biggest threat to the majority of Ontario’s populations of Hill's Thistle is the progressive loss of this species’ habitat to the construction of permanent residences on private properties that are located in one of the province’s most scenic shoreline areas. In addition, the site that contains the largest number of mature individuals is licensed for the extraction and crushing of limestone aggregates. All-terrain vehicles have damaged several of the alvars in which this species occurs, due to the popularity of these open areas for ATV use. Finally, certain invasive species could have a possible impact on Hill's Thistle in Ontario.

Summary of Progress to Date In 2005, 633 plants (23 in flower) were found at 28 sites at Wasaga Beach. Only 16 flowering plants were found in 2004. Summary of Research/Monitoring Activities In 2005, staff at Wasaga Beach Provincial Park monitored and reported on their population of Hill’s Thistle. There is now good information on the current status of Hill’s Thistle at the park. URLs COSEWIC Assessment and Status Report: Hill`s Thistle:http://dsp-psd.pwgsc.gc.ca/Collection/CW69-14-425-2005E.pdf