Scientific Name: Lamna nasus
Other/Previous Names: Porbeagle Shark
Taxonomy Group: Fishes
COSEWIC Range: Atlantic Ocean
COSEWIC Assessment Date and Status Change: May 2014
COSEWIC Status: Endangered
COSEWIC Status Criteria: A2b
COSEWIC Reason for Designation: The abundance of this shark declined greatly in the 1960s after fisheries began targeting this species. A partial recovery during the 1980s was followed by another collapse in the 1990s. Numbers have remained low but stable in the last decade, since catch has decreased. Directed fisheries have been suspended since 2013, though there is still bycatch of unknown magnitude in Canadian waters and unrecorded mortality in international waters. This species’ life history characteristics, including late maturity and low fecundity, render it particularly vulnerable to overexploitation.
COSEWIC History of Status Designation: Designated Endangered in May 2004. Status re-examined and confirmed in May 2014.
SARA Status: No schedule, No Status
Date of Listing (yyyy-mm-dd): 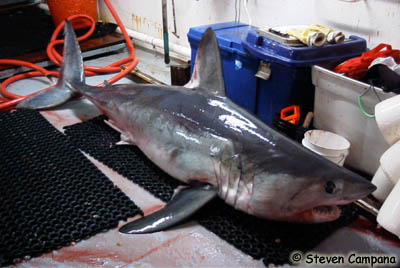 The Porbeagle Shark is a large coastal and oceanic shark that lives in cold to temperate waters. This very active swimmer has a powerful streamlined body that reaches maximum height at the dorsal fin and a maximum length of approximately 3 m. The back of the Porbeagle Shark is dark grey to bluish black in colour and its belly is white. The head is stout, the snout is pointed and the eyes are large. The mouth, which is moderate to large in size, has rather large, pointed blade-like teeth with smooth edges that are identical on both jaws. The gill slits are long. On the chest, the large pectoral fins, which are twice as long as they are wide, originate behind the fifth gill slit. As with any shark, this species has two sets of dorsal fins; the first, which is large and triangular, is nearly as high as it is long, while the second, which is near the tail, is very small. The anal fin, which is also very small, originates just below the dorsal fin. The pelvic fins originate from the pelvis and are slightly bigger. The tail is joined to the body by a thin caudal peduncle marked by a prominent central line on both sides. The small secondary caudal fin keels are a particularity of this species. This stout, crescent-shaped fin constitutes the tail and its upper half is bigger than its lower half. Pits are clearly visible on the back and the belly in front of the caudal fin.

The Porbeagle Shark is found in the North Atlantic Ocean and, globally, in the South Atlantic Ocean, South Indian and South Pacific oceans, as well as in the Antarctic Ocean. In the northwest Atlantic Ocean, Porbeagle Shark populations can be found in the waters off Greenland, Canada, the United States and Bermuda. In Canada, this species occurs in an area extending from northern Newfoundland to the Gulf of St. Lawrence and around Newfoundland to the Scotian Shelf and the Bay of Fundy. While this population is not confined to Canadian waters, the largest part of its range is located there. Due to the lengthy annual migrations of this population between the Gulf of Maine and the Georges Bank, and between Newfoundland and the Gulf of St. Lawrence, it is important to note that its abundance in Canadian waters is strongly affected by these seasonal migrations. The total area of the Porbeagle Shark’s area of occurrence in Canada covers 1 210 000 km². Based on recent catch locations, the area of occupancy is estimated to cover approximately 830 000 km². Nothing indicates that its range in Canadian waters has in any way changed over the past 45 years. The abundance of the Porbeagle Shark has declined sharply since commercial fishing of this species began in 1961. Estimates based on a number of techniques indicate that this species’ biomass, or the total mass of all living Porbeagle Sharks, dropped rapidly after fishing began in 1961; this drop was followed by a slight rebound in the 1980s and a drop to a record low in 2001. This record low, estimated at 4400 t, represents a loss of biomass of approximately 90% over a period of 40 years. Similarly, the current number of spawning females is estimated to be 6075, representing one tenth the initial abundance. The reduction in size noted in Porbeagle Sharks captured in mating grounds in the Newfoundland–Gulf of St. Lawrence area is another indication of overfishing. The median length of captured individuals dropped from more than 200 cm in 1961 to 140 cm in 2000, which is well below the size at maturity and indicative of a low proportion of mature individuals. In fact, prior to 1991, Porbeagle Sharks aged 10 to 15 years were the most abundant age group found off the southern coast of Newfoundland; in recent years, however, the average age has dropped to less than 3. Fishing quotas have been cut significantly and fishing is prohibited in certain areas inhabited by mature sharks. Juveniles now make up the bulk of the catch. Evidence gathered through tagging studies suggests that the introduction of individuals from other areas would not re-establish the Porbeagle Shark populations in the northwest Atlantic.

The Porbeagle Shark can be found from the coast to the open sea. While it is more commonly found on continental shelves, it is also found in ocean basins far from land and, occasionally, closer to shore. Even though it has been captured at the mouth of brackish estuaries, it is not a freshwater inhabitant. This shark can be found as often in surface and coastal waters less than 1 m in depth as it can at depths of 700 m. Most Porbeagle Sharks in Canadian waters can be found at temperatures ranging from 5?C to 10?C, with little variation from one season to the next, which suggests that these fish travel about to remain in the cold waters they prefer. As is the case with many sharks, Porbeagle Sharks are segregated by size and sex. In Canada, immature Porbeagle Sharks seem to mainly inhabit the Scotian Shelf, while mature individuals migrate annually along the Scotian Shelf towards the Newfoundland mating grounds. Males seem to migrate in the spring and females arrive a little later. It is believed that mating in the northwest Atlantic occurs in the Grand Banks, south of Newfoundland and at the mouth of the Gulf of St. Lawrence. Gestating females can also be found from late September to December on the Scotian Shelf and in the Grand Banks area; however, they are rarely found between January and June. In fact, very little is known about the overwintering and pupping grounds of the Porbeagle Shark.

As with all sharks, the Porbeagle Shark is ovoviviparous, meaning that the eggs hatch inside the female’s belly. The reproductive cycle appears to last one year, which means that there is no extended latency period after birth. Mating occurs from late September until November, and pupping occurs eight to nine months later, between early April and early June. On average, females give birth to four young. Young sharks are left on their own from the moment of birth and they have a high survival rate. The first year is a period of relatively rapid growth for the Porbeagle Shark, which is followed by slow growth and late maturation. Males reach maturity at age 8 and females at age 13. The span of a generation, or the average age of the mothers, is estimated to be 18 years. The Porbeagle Shark’s life expectancy is estimated to be between 25 and 46 years. Natural mortality rates for this shark are low; fishing is the main cause of death for the northwest Atlantic population. In fact, other than man, this species has no known predators. The Porbeagle Shark has heat exchangers in its circulatory system which allow it to retain heat and maintain a body temperature of between 7?C and 10?C above ambient water temperatures. The Porbeagle Shark is among the most cold-tolerant pelagic shark species. This cartilaginous fish is essentially an opportunistic fish-eating species that feeds on many species, particularly bony fish and squid. The Porbeagle Shark can be found alone, in schools or in feeding groups. Its size, swimming speed and distribution in the open sea and in deep waters make the Porbeagle Shark difficult to study. Consequently, its behaviour and sociobiology are poorly understood. This species’ life cycle characteristics, including late maturation and low fertility rates, make it particularly vulnerable to overfishing.

The late maturation and low fertility rates of the Porbeagle Shark make it extremely vulnerable to overfishing and limit its ability to recover. Continued exploitation in the northwest Atlantic, albeit at reduced levels, exacerbates these limiting factors all the more. Currently, directed pelagic longline fishing operations conducted for commercial purposes in Canada are the main source of capture of Porbeagle Sharks in this region. This species is also targeted by directed fishing operations in the United States and is captured as bycatch by Canadian, American and international (primarily Japanese) pelagic longline fleets targeting swordfish and tuna. It is uncertain whether management measures to reduce exploitation would be sufficient to allow the Porbeagle population to recover. Although current quotas are significantly lower than catch levels from the mid-1990s, they are still high in relation to the low population numbers. There is nothing at this time to indicate that the decline of the Porbeagle Shark has ceased. In fact, it is not even certain that these declines are reversible.