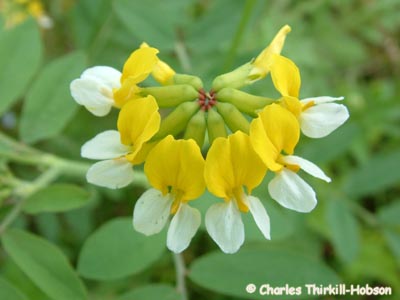 The Bog Bird’s-foot Trefoil is a low-growing, sprawling perennial herb. This plant has a short underground stem that produces an average of 3 to 6 more-or-less erect stems measuring 15 to 60 cm in length. The plant has compound leaves (i.e., leaves divided into parts called leaflets) that are arranged in an alternating pattern around the stems. There are 5 to 9 oval leaflets measuring 1 to 2.5 cm in length. The leaves are also pinnate, meaning that the leaflets are arranged on either side of a common stem like the barbs of a feather, and have a pair of stipules (appendages resembling small leaves). The papery stipules are egg-shaped, broader at the top and measure 3 to 10 mm in length. The flowers, which resemble pea flowers, are yellow and cream-coloured, though some flowers become reddish as they age. They are gathered in compact clusters, each containing 3 to 12 flowers. These inflorescences are borne at the end of long stalks that originate in the leaf axils. Although they are generally bare, the stems occasionally have a small papery leaf or bract. The petals come together to form a corolla, which measures 10 to 15 mm in length. The petals are joined along one edge that extends into a clearly defined beak pointed towards the outside of the inflorescence. The green sepals at the base of the flowers come together to form the tubular calyx, which measures 4 to 8 mm in length and has little teeth. The fruit of the Bog Bird’s-foot Trefoil is a slender pod measuring 3 to 6 cm in length and 1.5 to 2 mm in width. Each pod contains 5 to 20 cylindrical seeds. The seeds, dark brown to black in colour with olive-green marbling, are shiny and measure approximately 1.5 mm in length.

The Bog Bird’s-foot Trefoil can be found in western North America on southeastern Vancouver Island, British Columbia and, in the United States, west of the Cascades Range and along the Columbia River Gorge from northwestern Washington to central California. There are currently seven known populations in Canada, all of which are found near Nanaimo on Vancouver Island, or on the neighbouring Gabriola Island. In 2003, between 1500 and 2000 individuals were noted over a total area of 650 m². Populations once reported in two other locations were not found and have probably disappeared. In recent years, many hours were devoted to a thorough search for Bog Bird’s-foot Trefoil in the province. Despite these efforts, no new sites were discovered. However, since some of the suitable habitats for this species are on private land with limited access, there may possibly be other populations. In the absence of a long-term study of the Bog Bird’s-foot Trefoil, it is difficult to assess British Columbia population trends. There appears, however, to have been population growth on at least one site, the site on Gabriola Island. The species in this area grew from a single individual in 1996 to between 65 and 70 individuals in 2003. The species has successfully propagated in this suitable habitat, but since it is on private land, there is nothing to protect it against future development. In addition, the Canadian populations are located approximately 240 km away from the nearest reported population in Washington State. Consequently, if the Canadian populations were to disappear, it is highly unlikely that this species could re-establish itself in Canada.

In British Columbia, the Bog Bird’s-foot Trefoil can be found in open wet meadows, along creeks, in wet ditches or in seepages. These are relatively rare habitats in which underground water comes to the surface and puts plants in close contact with fresh, flowing water. In addition, the thin layer of soil covering the gently sloping rock base tends to remain moist from late fall to spring but to dry out in summer when there is little precipitation and the temperatures are high. These conditions provide ample moisture throughout this plant’s growing and blooming periods. Plants most often associated with the Bog Bird’s-foot Trefoil include Mimulus guttatus, Triteleia hyacinthine, Plectritis congestus, Plagiobothrys scouleri, Veronica beccabunga ssp. Americana and Montia parvifolia.

The Bog Bird’s-foot Trefoil is a perennial plant that produces several new shoots every spring. The flowers emerge in May and bloom around early July. Very little is known about the reproductive biology of this species. We do know, however, that the production of viable seeds normally requires cross-pollination. In fact, even though Trefoil flowers are hermaphroditic (having both male and female reproductive organs), they must be pollinated with pollen from other individuals. Insect pollinators specific to this species have not yet been identified, but the flowers seem to have adapted to pollination by bees, including bumble bees. Around mid-July, the seed pods begin to open and disperse ripe seeds near the plant until August. Like the seeds of other legumes, Trefoil seeds are protected by a hard casing that, in certain cases, can delay germination for several months or several years. Normally, seed germination and the beginning of growth occur in late winter and early spring when temperature and soil moisture conditions are ideal. There is no data on the average life expectancy of individuals, though this perennial plant can live several years when conditions are favourable.

Habitat loss, in conjunction with the limited extent of suitable habitats available for this species and the small size of the seven known populations, poses a serious and urgent threat to the Bog Bird’s-foot Trefoil in Canada. Moreover, an application has been submitted for a trailer park development permit on the site containing the only major population of this species in the country. Habitat degradation caused by the intensive recreational use of all-terrain vehicles also poses a threat to this population. In addition, logging operations near the main population increase the risk of colonization by invasive plants. Aside from habitat destruction, competition from other types of vegetation currently poses the most significant threat to the Bog Bird’s-foot Trefoil.

The Bog Bird’s-foot Trefoil is not currently protected under any provincial law in British Columbia. The small population in the Woodley Range Ecological Reserve is protected, to a certain extent, by virtue of the fact that it is in an ecological reserve. In addition, plants at this site are threatened by activities on adjacent properties, including the use of all-terrain vehicles, logging and deforestation.