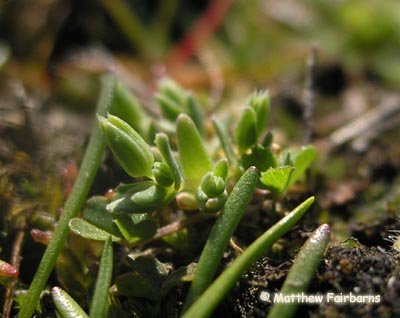 The Dwarf Sandwort is an annual plant that is a dull bluish green and that grows to a height of 2 to 5 cm. This small herbaceous plant has either a single stem or a few waxy, erect stems that are simple or branched. The leaves at the base of the plant have a single vein; they measure between 2 and 4 mm in length and less than 0.5 mm in width, and are long and narrow with a rounded tip. These small leaves, which are arranged in pairs on the stems, also have two small appendages called stipules that resemble leaves. The top of the plant has few leaves and, while they are similar, they are slightly smaller and have no stipules. The small flowers of the Dwarf Sandwort are grouped in a loose inflorescence with small leaves called bracts. The inflorescence often accounts for four fifths of the total height of the plant. When present, the flower petals are shaped like a small elongated oval and measure 1 to 2 mm in length. The green sepals at the base of the flower are 2 to 3 mm long; they are lance-shaped and have tips that are more or less pointed. The fruit, called a capsule, is dry, egg-shaped with an enlarged base, and measures 1 to 2 mm in length. The brown seeds are approximately 0.3 mm long and minutely pimpled.

The Dwarf Sandwort is found in western North America, from British Columbia south to Idaho, Arizona and northeastern California in the United States towards the south. In Canada, this species is found only on Rocky Point on southern Vancouver Island, British Columbia. When first observed in 1977, approximately 20 Dwarf Sandwort plants had been noted in a 10 m² area. When it was last observed in 2002, only 9 plants were found over the same area, representing a 55% decline over a 25-year period. As with any annual ephemeral, however, it is possible that this species undergoes annual population size fluctuations based on weather conditions. Consequently, this decline does not necessarily represent a significant trend. Since 1997, numerous unsuccessful searches for new individuals or populations have been conducted in local habitats favourable to the species. Immigration is unlikely to occur since the closest population is located more than 300 km away in Washington State.

The Dwarf Sandwort can be found on the coast of British Columbia, where it grows in a small vernal seep on the flat top of a coastal headland with about 10 cm of moraine. It is located in a depression with a 0 to 24% southeast slope. The area is damp in spring and more or less dry late in the season. The soil, a type of sandy humus, has a low nutrient content. Late in the season, this rapidly draining soil does not hold moisture. The growth of vegetation on the coastal headlands where the Dwarf Sandwort occurs is controlled by winds and salt spray. Erosion plays a key role in the germination of this species, as it provides a constant and fresh source of mineral soil within the vernal seep habitat. Several species are associated with the Dwarf Sandwort in this habitat, including Barren Fescue, Beach Bluegrass, Blinks, Early Hairgrass and various cudweed species.

Very little is known about the biology of this recently discovered species. We do however know that, in British Columbia, the Dwarf Sandwort overwinters in the seedling stage. Thus, it seems to behave like a winter annual that begins blossoming in May or June. As is the case with this type of species, flowering is largely dependant on temperature. Occasionally, its tiny flowers lack petals and do not produce nectar. The absence of characteristics to attract pollinating insects and a study of the floral structure suggest that this is an exclusively self-pollinating species (i.e., the flowers are fertilized with their own pollen). The seeds of the Dwarf Sandwort seem to germinate in December or January. This is also the period during which the plant is most vulnerable, due to the washout of seeds and seedlings by natural precipitation, and sensitivity to moisture stress. As with any seasonal plant, the germination and growth of the Dwarf Sandwort rely heavily on precipitation.

Due to its small size, the Dwarf Sandwort is particularly sensitive to any disturbance of its habitat. Drying of the small vernal seep it calls home could be disastrous. The annual numbers of Dwarf Sandwort plants are very likely influenced by winter precipitation. Should the moisture required for germination and development become unavailable, this species could possibly disappear altogether. Similarly, overly humid conditions could prove to be unsuitable. Digging by gulls (as happened in the immediate vicinity of the site during the winter of 2002 to 2003) and possibly trampling by trespassing boaters also pose real threats. Finally, encroachment by invasive plants could also constitute a limiting factor.

The Dwarf Sandwort is not currently protected under any provincial law in British Columbia. The only known population of this species is on Department of National Defence property to which public access is prohibited. New studies of the rare plants on this land will eventually be considered as part of a natural resources management program.