Scientific Name: Orthocarpus bracteosus
Taxonomy Group: Vascular Plants
COSEWIC Range: British Columbia
COSEWIC Assessment Date and Status Change: May 2004
COSEWIC Status: Endangered
COSEWIC Status Criteria: B1ab(iii)+2ab(iii); C2a(i,ii); D1
COSEWIC Reason for Designation: An annual herb of vernal pools and damp depressions present at a single remaining location where population size fluctuates widely with low numbers that may be fewer than 100 plants a year. Expansion is limited due to lack of suitable habitats and apparent low dispersal abilities. The population is at risk from spread of nearby invasive exotic plants, from trampling due to hiker traffic and local maintenance activities related to the nearby communications site and consequences of possible oil spills occurring in the busy shipping lanes surrounding the island site.
COSEWIC History of Status Designation: Designated Endangered in May 2004.
SARA Status: Schedule 1, Endangered
Date of Listing (yyyy-mm-dd): 2005-07-14 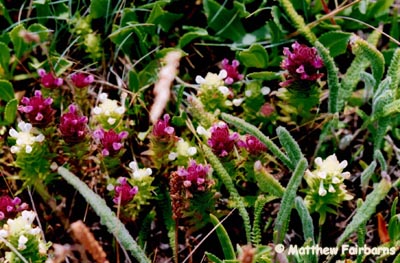 The Rosy Owl-clover is a small annual herb with a slim, single or branched stem that can grow to a height of 10 to 40 cm. The plant, which is generally rose-purple in colour, is entirely covered with short hairs. The stalkless leaves are arranged in an alternating pattern around the stem; they are covered with short hairs that are occasionally gland-tipped. They are linear or lance-shaped and measure 1.5 to 3.5 cm in length. The flowers range in colour from pink to purple and occasionally from white to cream; they are tubular and measure 12 to 20 mm in length. They are grouped in a compact terminal spike measuring 3 to 15 cm in length, which is densely hairy and glandular. The spike projects from the middle of prominent bracts. The upper part of these three-lobed leaves is entirely green or rose-purple. The bracts are sometimes easily confused with the upper leaves. The sepals, which are tubular like the petals, are green and glandular. They can reach lengths of 6 to 10 mm. The fruit is a capsule, elliptical in shape, measuring 5 to 7 mm in length. Each capsule contains 8 to 15 seeds measuring approximately 3 mm.

The Rosy Owl-clover is found in western North America, from Vancouver Island to Oregon, west of the Cascade Range, and southward from east of the Cascades to northern California in the United States. In Canada, it has been observed near Victoria, British Columbia. A total of nine historic records are known for the Rosy Owl-clover. Eight of these presumed populations have now disappeared and there remains a single population on Trial Island near Victoria. This sole Canadian population occupies an area of approximately 300 m². Between 1998 and 2002, the number of individuals in this population fluctuated between 40 and 940. As these fluctuations vary tremendously, population numbers can drop below 100 in any given year. Despite sustained search efforts in 2001, 2002 and 2003, no new Rosy Owl-clover populations have been located in suitable habitats. All other populations in the Victoria and Puget Sound areas seem to have been extirpated. The nearest subsisting populations are approximately 300 km away in Washington State. Consequently, the province cannot hope to increase these populations through immigration from an external source.

The Rosy Owl-clover favours shallow vernal pools and small depressions that are moist in winter and dry in summer. It prefers soil that is 15 to 30 cm deep and rich in organic matter. It grows among a variety of small herbs, away from robust herbs, shrubs and trees. Historical occurrences of this species suggest that it once occurred sporadically in a variety of open habitats, such as ditches, grasslands and open fields, that are characterized by damp winters or dry summers. It would appear that these habitats are no longer suitable, as the gradual invasion of introduced grassy species has completely altered the vegetation.

The Rosy Owl-clover is an annual herb that germinates in March and April, grows, flowers and produces seeds in the spring or early summer and then withers and dies in July. Seed production is this species’ only means of reproduction. It is not known whether the flowers are capable of self-fertilization or whether they rely on nearby plants for cross-fertilization. On average, each plant produces 12 mature capsules. Each of these fruits contains an average of 7 apparently viable seeds. The seed dispersal mechanism is poorly understood. Since the seeds do not have a structure that would permit long-distance dispersal, it would appear that the majority of the seeds are dispersed near the parent plant. As with all clover species, the Rosy Owl-clover is a hemiparasite, meaning that it creates a root network with other plant species. While it is able to produce its own food through photosynthesis, the Rosy Owl-clover must obtain the water and nutrients it requires through a root network that parasitizes neighbouring plants, including legumes, grasses and composites.

Urbanization near Victoria, British Columbia, has resulted in the elimination of numerous historical Rosy Owl-clover populations and continues to threaten suitable unoccupied habitats. The invasion of weeds and of a few species of introduced shrubs has reduced the capacity of these habitats to support the Rosy Owl-clover and poses a threat to the last remaining population on Trial Island. Pedestrian traffic associated with the presence of boaters and a Canadian Coast Guard lighthouse on Trial Island also poses a threat to the current population. Marine pollution is a potential threat since this herbaceous species grows near sea level beside a very busy shipping route often used by oil tankers. Moreover, the fact that this species is limited in Canada to a single, very small population represents a serious limitation since any event that degrades the habitat could lead to the rapid elimination of the species.

The Rosy Owl-clover is not currently protected under any provincial law in British Columbia. However, the sole population on Trial Island is located in the Trial Island Ecological Reserve on the edge of provincial land rented by Seacoast Communications for commercial broadcasting purposes. The Canadian Coast Guard owns the lighthouse on the island, which is less than 250 m from this population. Like any species found in an ecological reserve, the Rosy-Owl clover enjoys a certain degree of protection under the Protected Areas of British Columbia Act. This law requires that a valid park use permit be issued before any plant can be destroyed, damaged or disturbed. There are no park employees stationed on Trial Island and the legal protection currently afforded ecological reserves does not protect the population from threats to the habitats.