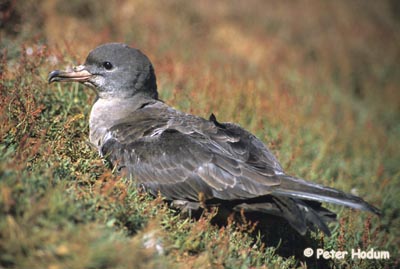 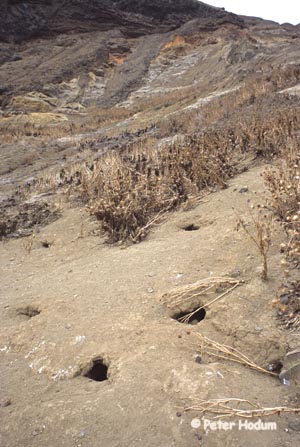 There is some uncertainty surrounding the classification of this species. The Flesh-footed Shearwater (Puffinus carneipes) is very closely related, but its plumage is entirely dark.

The Pink-footed Shearwater is a stocky seabird about the size of a medium gull. In flight individuals appear heavy, with laboured wingbeats alternating with glides. It is distinguished from other North Pacific shearwaters by a combination of greyish-brown plumage above, variably mottled pale grey underparts with white wing linings, and a dusky head. The plumage of adult and juvenile birds is alike and there are no seasonal differences, although males are larger than females on average. Its pinkish-yellow, dusky-tipped bill and pink legs and feet are distinctive. The Pink-footed Shearwater is a globally threatened species that is known to breed at only three sites worldwide. (Updated: 2018/01/19)

The Pink-footed Shearwater is known to breed on three islands off the coast of Chile: Mocha, Robinson Crusoe, and Santa Clara islands. At sea, the Pink-footed Shearwater primarily occupies waters of the continental slope, shelf-break, and shelf of the eastern Pacific. Its range extends from its breeding islands north along the coast of South and North America to the Gulf of Alaska and the southern Bering Sea, but only a few individuals occur north of Haida Gwaii. In Canada, the Pink-footed Shearwater occurs exclusively off the coast of British Columbia, with observations concentrated off the west coast of Vancouver Island, the entrance of the Strait of Juan de Fuca, and in Queen Charlotte Sound. Numbers in Canada peak from June to October. The global population size of the Pink-footed Shearwater is estimated at 28,000 breeding pairs. At Mocha Island, the population is believed to have declined considerably over the 20th century due to illegal chick harvesting and introduced predators. A study at Mocha Island in the late 1990s estimated a substantial decline in the number of breeding pairs (~40%) from an estimate in the late 1980s, although methods differed between surveys. There is plausible evidence of decline on Robinson Crusoe Island within the past 55 years (3 generations) due to predation of adults and chicks by Coatimundis and feral cats. However, the Robinson Crusoe population is thought to have been stable over the past 15 years, and monitoring at Mocha Island since 2010 suggests a stable population over that time. Trends within the Canadian range of the species are unknown. (Updated: 2018/01/19)

Pink-footed Shearwaters nest in burrows that they excavate in the soil of their breeding colonies. On Mocha Island, burrows are located in dense native forest along the seaward sides of upper slopes and ridgetops, while on Robinson Crusoe and Santa Clara islands, nests are located in remnant native forests or open terrain with grassy vegetation or bare soils. In the marine environment, Pink-footed Shearwaters display a preference for biologically productive waters associated with the continental slope, shelf and shelf-break. (Updated: 2018/01/19)

Pink-footed Shearwaters breed during the austral spring and summer, with birds returning to their colonies from early to mid-October. They lay a single egg per year, with egg-laying occurring from late November to mid-December. Eggs hatch from late January to mid-February after a prolonged incubation period, and fledging primarily occurs in May. Both parents share in incubation. After chicks fledge, post-breeders migrate north to their wintering grounds off Peru and the Pacific coast of the US and Canada. (Updated: 2018/01/19)

Threats facing this species at its colonies include human exploitation and disturbance, predation, disturbance and competition from introduced mammals; and habitat loss and destruction, particularly via erosion compounded by vegetation loss. At sea, the species is threatened by interactions with fisheries, oil and other pollution, plastic ingestion, and likely by competition with humans for prey fish. (Updated: 2018/01/19)

Summary of Progress to DateA draft Recovery Strategy has been developed and a Recovery Team is being formed. Summary of Research/Monitoring ActivitiesThe Canadian Wildlife Service (CWS) routinely conducts at sea Ship-of-Opportunity surveys (aboard Coast Guard vessels) to monitor abundance, distribution, and seasonality of pelagic seabirds off the west coast of Canada. These surveys have been, and continue to be, the only means of monitoring the Pink-footed Shearwater. The Ship-of-Opportunity data, spanning more than 18 years, are being analyzed and will be used to produce an atlas of the seasonal distribution of all pelagic seabirds off Canada’s west coast, including the Pink-footed Shearwater. The Commission for Environmental Cooperation and the National Oceanic and Atmospheric Administration, (U.S. Department of Commerce) have co-sponsored a collaborative study of Pink-footed Shearwaters movements and habitat use at sea. Solar-powered satellite tracking devices were attached to birds captured in their nesting burrows in Chile. The birds are now being tracked as they move northward. Further plans include capturing additional birds at sea in California and perhaps off S.W. British Columbia and attaching satellite tags. This project involves staff from the Canadian Wildlife Service, the University of Washington, Duke University, and National Oceanic and Atmospheric Administration. Summary of Recovery ActivitiesA database of all CWS-sponsored ship-of-opportunity sightings of Pink-footed Shearwaters in Canadian and adjacent waters has been created and a draft map has been produced. URLs Link to the satellite tracking project: http://www.seaturtle.org/tracking/?project_id=132 Government of Canada Species at Risk Public Registry:http://www.sararegistry.gc.ca/status/showDocument_e.cfm?id=490 COSEWIC webpage:http://www.cosewic.gc.ca/eng/sct1/searchdetail_e.cfm?id=819&StartRow=1&boxStatus=All&boxTaxonomic=All&location=All&change=All&board=All&commonName=Pink-footed%20Shearwater&scienceName=&returnFlag=0&Page=1