Scientific Name: Coregonus zenithicus
Taxonomy Group: Fishes
COSEWIC Range: Northwest Territories, Alberta, Saskatchewan, Manitoba, Ontario
COSEWIC Assessment Date and Status Change: May 2003
COSEWIC Status: Threatened
COSEWIC Status Criteria: Qualifies for Special Concern but designated Threatened due to overall population declines in North America, especially in the Great Lakes and larger lakes such as Lake Nipigon and Great Slave Lake, that have left the remaining populations fragmented.
COSEWIC Reason for Designation: This species has been extirpated from lakes Huron and Erie and is in decline in Lake Superior and Great Slave Lake. It is still present in Lake Nipigon and numerous smaller lakes where its status is not well known. Threats include fishing, introduction of exotics and climate change.
COSEWIC History of Status Designation: Designated Threatened in April 1987. Status re-examined and confirmed in May 2003.
SARA Status: Schedule 2, Threatened - (SARA Schedule 1 provisions do not apply)
Date of Listing (yyyy-mm-dd): 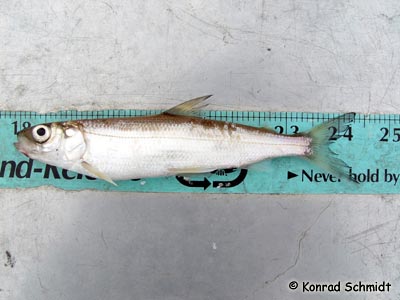 The Shortjaw Cisco is a deepwater member of the whitefish family. It has an elliptical body covered in large, smooth scales. It is silver, with an olive or tan back and white underbelly. The mouth is small and toothless, and as its name suggests, the lower jaw is shorter than or even with the upper jaw. Shortjaw Cisco is distinguished from other ciscoes by the number of gillrakers (bones growing under the gill plates). This fish typically has fewer gillrakers, often shorter in length, than other ciscoes. It generally weighs about 300 g, and varies from 150 to greater than 300 mm standard length; it is found in lakes at depths of 20 to 180 m.

The Shortjaw Cisco is associated with the Great Lakes, but is widely distributed throughout central Canada. The species once inhabited lakes Huron, Michigan, Superior, and Nipigon, but is no longer found in lakes Huron and Michigan. It has been reported in at least 22 other lakes outside of the Great Lakes, from Ontario, Manitoba, Saskatchewan, Alberta, and the Northwest Territories. The Shortjaw Cisco is believed to be in decline in the Great Lakes region. It is no longer found in Lake Michigan, and populations are estimated to have declined significantly in lakes Huron and Superior. Population trends in other lakes throughout its range are generally unknown.

The Shortjaw Cisco is found in the deeper waters of large lakes. It has been found at depths of between 55 to 114 m in lakes Superior, Michigan, and Huron. In Lake Superior, Shortjaw Cisco has been found to move seasonally. It was found at depths of 110 to 114 m in spring, 55 to 71 m in summer, and at 73 to 90 m in winter. Little is known about habitat preferences in smaller lakes.

Shortjaw Ciscoes spawn in either fall or spring in the Great Lakes. Fall spawning takes place in lakes Michigan, Huron, and Erie, and occurs in either spring or fall in Lake Superior. Eggs are deposited over the lake bottom and develop over three to four months, depending on water temperature. It is estimated that a Shortjaw Cisco of 271 mm total length would produce 3 230 eggs, and a fish of 305 mm total length would produce 18 768 eggs. The Shortjaw Cisco, similar to other fish species, grows quickly during its first year of life. Females generally increase in weight faster than males, but usually have similar growth rates in length to males. This fish reaches sexual maturity at five years of age. Shortjaw Cisco is an opportunistic feeder and tends to eat only one prey item at a time. It feeds on tiny lake organisms in the water column and at the lake bottom, and is itself an important food source for predators such as Lake Trout and Burbot. Shortjaw Cisco may be vulnerable to the Sea Lamprey, as its favoured prey items become scarcer.

Over-exploitation in food fisheries in the early 1900s likely led to the decline of this species in lakes Huron and Michigan. In the last 30 years, competition and predation from Rainbow Smelt and Alewives, two introduced exotic fish species, has had a negative impact on Shortjaw Cisco populations. Other threats include habitat loss and degradation as a result of urban, agricultural, and industrial activities.