Scientific Name: Abronia umbellata
Taxonomy Group: Vascular Plants
COSEWIC Range: British Columbia
COSEWIC Assessment Date and Status Change: May 2004
COSEWIC Status: Endangered
COSEWIC Status Criteria: B1ab(ii,iii)+2ab(ii,iii); C2a(i,ii); D1
COSEWIC Reason for Designation: An herb of maritime beach habitats last seen at a single site along the west coast of Vancouver Island with losses of two historic populations. The site of the last documented population is greatly disjunct from other small populations in Oregon. The species is found, characteristically, in low numbers and tends to persist in the seed-bed of its beach and foredune habitats, sporadically producing flowering plants. The species was last recorded in 2001 with only several plants present. It is assumed that the species may still persist as dormant seeds and may produce reproductive plants at some future date. The expansion of exotic beach grasses has reduced the quality and availability of its upper beach and foredune habitats at a number of sites within its historic range.
COSEWIC History of Status Designation: Designated Endangered in May 2004.
SARA Status: Schedule 1, Endangered
Date of Listing (yyyy-mm-dd): 2005-07-14 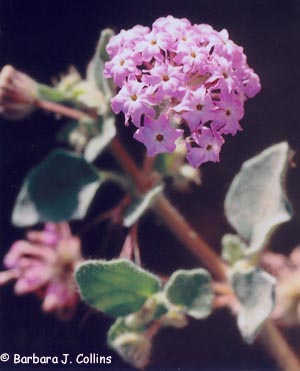 The Pink Sand-verbena is a perennial herb. In Canada, the plants have trailing stems up to 1.5 m long. The leaves are lance-shaped with rounded tips or widened bases. They are arranged in opposite pairs along short branches and are thick, fleshy, and densely glandular. The leaves are 2 to 6 cm long and 0.8 to 3.5 cm wide. They have a stalk called a petiole that is 2.5 to 7 cm long. The flowers occur in many-blossomed rounded clusters. These large balls of greenish or pinkish flowers are on a stout stalk called a peduncle, which is 2 to 4 cm long. Each flower consists of a tube 6 to 8 mm long that flares into five pink lobes, each of which is 5 to 6 mm wide. The Pink Sand-verbena bears dry fruits called achenes, which are 10 to 12 mm long. Each achene has three or four distinctive wings that are wider than the rest of the fruit and it contains a single, brown seed approximately 3 mm long and 1.5 mm wide. This species can be easily confused with its close relative Abronia latifolia when the latter is not flowering. However, Abronia latifolia can be distinguished by its yellow flowers; its leaves, which are wider than those of the Pink Sand-verbena; and the wings of its achenes, which are narrower than the rest of the fruit rather than wider.

In the past, the Pink Sand-verbena was found at various sites along the Pacific coast from southwestern British Columbia to northern California. Before 1927, the Pink Sand-verbena was known in Canada only at Bamfield (on the shore of Pachena Bay) and at Ahousat (near Tofino, off the central-west coast of Vancouver Island.) The species was last observed in 2001, at a single location, namely Clo-oose Bay south of Tofino. Population counts have been conducted for this species on the beach at Clo-oose Bay only, because there is not enough precise information on the geographic positions of its two other historic sites for the earlier populations to be located. The two plants identified on the beach at Clo-oose Bay in 2000 and the three observed at the same location in 2001 were swept away by storm waves in October at the end of the growing season. No specimens appeared in 2002 or 2003. It is believed that the number of seeds that germinate on this beach over the course of the season is rarely high because of the unfavourable conditions.

The Pink Sand-verbena is found only on upper sand beaches, just below the driftwood zone, along exposed coastlines. Few plants survive from one growing season to the next in this ephemeral habitat, which is scoured by high tides and winter storms. In the past, the Pink Sand-verbena has been observed on only three beaches, but other beaches might provide habitat for this species, since they support or have previously supported Abronia latifolia, whose requirements are similar to those of the Pink Sand-verbena. It should be noted, however, that sand beaches and sand dunes are relatively scarce along the coast of British Columbia.

The Pink Sand-verbena uses sexual reproduction only, propagating by means of seeds. Seed production in this species appears to be good, and most of the achenes contain viable seeds. However, the germination rates are low in the natural habitat, because the achenes’ protective envelope must be abraded by sand grains for the seeds to germinate. In the short term, the survival of the Pink Sand-verbena appears precarious because of the ephemeral nature of its habitat, which is regularly subjected to wave action. In the long term, its chances of survival are slightly better, thanks to the very tough envelope of its fruits. The sporadic appearance of this species in British Columbia means either that its seeds persist for a long time in this environment, or that they are coming from the neighbouring population in Oregon, in the United States. Local scattering of seeds is probably encouraged by the wind, which carries the winged fruits around the driftwood zone.

The main factor threatening the survival of the Pink Sand-verbena in British Columbia is the introduction of Ammophila arenaria and A. breviligulata, two fast-growing beachgrasses that have already invaded a large part of the habitat suitable for the Pink Sand-verbena. Because of its extensive network of underground stems and roots, A. arenaria is hard to eradicate. These Ammophila transform their habitat to the point that any possibility of colonization by the Pink Sand-verbena is eliminated. Heavy waves also pose a major threat for the Pink Sand-verbena. The sand beaches where this species grows are often scoured by waves during high tides and winter storms, so that few plants survive from one growing season to the next. There is also a small risk that the populations of Pink Sand-verbena will be trampled by people walking on the beaches that may support them.

The Pink Sand-verbena is not protected by any provincial laws in British Columbia. However, if the species were to reappear on the beach of Clo-oose Bay, which is located in the Pacific Rim National Park Reserve, the protection afforded by the Canada National Parks Act would apply.

Summary of Progress to Date The Pink Sand-verbena was considered extinct in Canada until it was rediscovered on a beach along BC’s West Coast Trail in 2000; it also was seen at the same location the following year. Immediate recovery actions and habit restoration are essential for the survival of this species. Unfortunately little is known about this species. Detailed research and monitoring is needed to gain a stronger understanding of the species and its habitat requirements. Recovery planning is underway and a recovery strategy has been drafted. Summary of Research/Monitoring Activities The location of rediscovery has been surveyed regularly; however, individuals have not been seen since 2001. It is believed that the species may still be present as dormant seeds at this site. The single known Canadian location has been monitored annually since 1999. Summary of Recovery Activities Pink Sand-verbena seeds were collected from plants in 2001 and were set aside for conservation and as a source for experimental study. URLs Parks Canada – Pacific Rim National Park Reserve of Canada:http://www.pc.gc.ca/pn-np/bc/pacificrim/natcul/natcul2d_e.asp