Scientific Name: Rangifer tarandus pearyi
Taxonomy Group: Mammals
COSEWIC Range: Northwest Territories, Nunavut
COSEWIC Assessment Date and Status Change: November 2015
COSEWIC Status: Threatened
COSEWIC Status Criteria: A2a
COSEWIC Reason for Designation: This subspecies of caribou is endemic to the Canadian Arctic Archipelago, living on the edge of plant growth in polar desert and arctic tundra environments. The current population is estimated at 13,200 mature individuals. From a population high of 22,000 in 1987, the species experienced a catastrophic die-off in the mid-1990s related to severe icing events in some parts of its range. The population was ca. 5,400 mature individuals in 1996, the lowest since surveys first commenced in 1961. Of four subpopulations, two are currently showing an increasing trend, one is stable, and the fourth had fewer than 10 individuals at the last count in 2005, with no evidence of any recovery. The overall population has experienced an estimated three-generation decline of 35%, but has been increasing over the past two decades. The highest-impact threats derive from a changing climate, including increased intensity and frequency of rain-on-snow events negatively affecting forage accessibility in winter, and decreased extent and thickness of sea ice causing shifts in migration and movement patterns.
COSEWIC History of Status Designation: The original designation considered a single unit that included Peary Caribou, Rangifer tarandus pearyi, and what is now known as the Dolphin and Union Caribou, Rangifer tarandus. It was assigned a status of Threatened in April 1979. Split to allow designation of three separate populations in 1991: Banks Island (Endangered), High Arctic (Endangered) and Low Arctic (Threatened) populations. In May 2004 all three population designations were de-activated, and the Peary Caribou was assessed separately from the Dolphin and Union Caribou, Rangifer tarandus. The subspecies pearyi is composed of a portion of the former "Low Arctic population", and all of the former "High Arctic" and "Banks Island" populations, and it was designated Endangered in May 2004. Status re-examined and designated Threatened in November 2015.
SARA Status: Schedule 1, Endangered
Date of Listing (yyyy-mm-dd): 2011-02-04 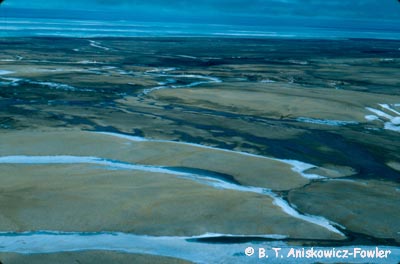 Peary Caribou are the smallest North American caribou. They are mostly white with a slate back and a grey stripe down the front of the legs. In winter, the slate back may turn a dingy brown, and some individuals appear almost entirely white. Antler velvet is slate-coloured instead of brown like deer and other caribou. The antlers tend not to spread as wide as those of other caribou but otherwise they are similar. The skull has a short rostrum and high cranium. The hooves are short and wide. They are genetically distinct from other caribou in Canada. Peary Caribou are integral components of Inuit and Inuvialuit culture and economy. As the only source of caribou meat for several Arctic communities, they are important in the subsistence economy of local communities, and represented in traditional crafts that are marketed and collected throughout Canada and internationally. Persisting at the limits of plant and animal existence, Peary Caribou are an integral part of Arctic biodiversity and increasingly important in the scientific study of ecosystem response to climate change. (Updated 2016/12/20)

Peary Caribou are endemic to Canada in the Northwest Territories and Nunavut. They have the northernmost distribution of all caribou in North America, situated almost entirely within the Canadian Arctic Archipelago, with the exception of Baffin Island. Peary Caribou move relatively long distances, including annual migrations across sea ice, regular movements within multi-island home ranges and erratic large-scale movements among islands during severe winters. Four subpopulations are recognized, based on genetic evidence, extent of inter-island movements, and scientific and local expertise: 1) Banks-Victoria islands, 2) Prince of Wales-Somerset-Boothia, 3) Eastern Queen Elizabeth Islands, and 4) Western Queen Elizabeth Islands. (Updated 2016/12/20)

The habitat of Peary Caribou is treeless Arctic tundra primarily within High and Middle Arctic tundra ecoregions. Most of the range can be characterized as a polar desert with short, cool summers and long, cold winters. The growing season is brief (50-60 days) and variable. Snow cover is generally present from September to May (Banks Island) or mid-late June (Melville Island). Land dominated by dry vegetation covers about 36% of the ice-free area within Peary Caribou range while the terrain ranges from relatively flat (south and west) to mountainous (north and east). The climate is also strongly regionalized with east-west and north-south gradients in precipitation and temperature, affecting primary productivity and forage availability. Above-ground plant biomass ranges from less than 100 g/m² (Queen Elizabeth Islands and parts of the Prince of Wales-Somerset group) to some areas (Banks Island and Prince of Wales Island) having up to 500–2000 g/m². Peary Caribou have a broad/varied diet and are versatile feeders with diet varying seasonally in relation to available forage and corresponding nutritional content. Essentially all historical Peary Caribou habitat is available and has not been lost or fragmented by industrial or other anthropogenic developments. (Updated 2016/12/20)

Peary Caribou have several adaptations to their Arctic environment such as compact body size for conserving heat, hooves that allow them to walk on and dig through wind-driven snow, and pelage that provides camouflage. They are adapted to limited plant growth with a highly compressed growing season and long periods of snow-covered frozen standing vegetation. Peary Caribou are polygynous, living in small groups and maintaining a wide dispersion across the landscape, even during calving and rutting. They are thought to live approximately 15 years in the wild, and have widely variable vital rates. Cows usually produce their first offspring by 3 years of age; under conditions of high forage availability cows can calve every year but this is rare. Peary Caribou cows cope with occasional years of restricted forage access either by not becoming pregnant, or by weaning a calf prematurely. The intergeneration period (the average age of parents of the current year’s cohort) cannot be precisely calculated, but is estimated at 9 years. (Updated 2016/12/20)

The overall calculated and assigned threat impact is Very High-Medium for Peary Caribou. This wide range rank of threat impacts is due to the combined effect of the high number of mostly low-impact threats, and the considerable uncertainty, unpredictability, and potential overlap and interaction of most individual threats. The highest-impact threat to Peary Caribou arises from the myriad effects of a changing climate, including increased intensity and frequency of severe weather events negatively affecting forage accessibility in the winters, and decreased extent and thickness of sea ice causing shifts in migration and movement patterns. The extent to which such negative effects could be offset by increases in plant productivity is uncertain. Other threats that are known, suspected, or predicted to have negative impacts on reproductive success or survival of Peary Caribou under a warming climate include pathogens (especially Brucella and Erysipelothrix) and increased shipping. Lower-impact direct threats include hunting, energy production and mining, human intrusions from work (non-tourist) activities, year-round military exercises, increases in traffic from snowmobiles, helicopters, and airplanes, competition with Muskoxen and airborne pollution. (Updated 2016/12/20)