Scientific Name: Fundulus diaphanus
Other/Previous Names: Banded Killifish (Newfoundland population)
Taxonomy Group: Fishes
COSEWIC Range: Newfoundland and Labrador
COSEWIC Assessment Date and Status Change: May 2014
COSEWIC Status: Special Concern
COSEWIC Status Criteria:
COSEWIC Reason for Designation: This species has a scattered distribution in insular Newfoundland and occupies a small area of occupancy. The species can be impacted negatively by turbidity and hydrological alterations that result from road, forestry, cottage, and hydrological development. It could become Threatened if these impacts are not managed or reversed with demonstrable effectiveness.
COSEWIC History of Status Designation: Designated Special Concern in April 1989. Status re-examined and confirmed in May 2003 and May 2014.
SARA Status: Schedule 1, Special Concern
Date of Listing (yyyy-mm-dd): 2005-01-12 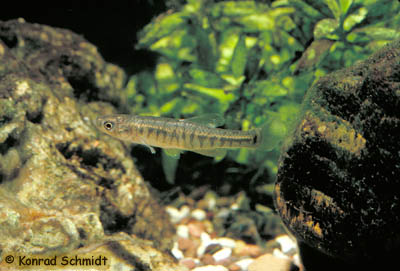 The Banded Killifish is a very attractive small fish. Adults are usually from 5 to 10 cm long, with olive-coloured sides. Numerous pale silver vertical bands rising from the abdominal region alternate with contrasting dark bands descending from the dorsal region. The female has fewer bands than the male, and the banding differs between the two. The female’s dark bands tend to black, are thin, distinct, and often do not appear to span the full width of the body. On the male, the light and dark vertical bands are of a similar width, with the dark bands paler and less distinct than those of the female.

Globally, the Banded Killifish is found in eastern North America from southeastern Manitoba, south through the Dakotas and west as far eastern Montana, southeast toward the northeastern tip of South Carolina, and north to the Atlantic provinces. In Canada, the Banded Killifish occurs in the Atlantic provinces and in suitable habitat of the St. Lawrence River Valley in Quebec, through the Great Lakes watershed of southern Ontario to Lake Superior. A small population in northwestern Ontario and southeastern Manitoba represents the northern limit of the mid-American occurrence of this species and is not directly connected to other Canadian populations. There are seven known sites for the Newfoundland population of Banded Killifish. The majority of these sites are coastal, in the southwestern portion of the island, although one site is inland, in the Indian Bay watershed of northeastern Newfoundland.

Banded Killifish in Newfoundland tend to frequent quiet areas of clear lakes and ponds with a muddy or sandy bottom. For spawning, they depend on warm water where there is abundant submerged aquatic vegetation and considerable detritus. Although this type of habitat is abundant in Newfoundland watersheds, the species occurs only in very restricted areas of one or two of the lakes in the watersheds it occupies. It cannot use inland waters where there are barriers to migration, such as rivers with steep gradients; however, the Banded Killifish does not occur in habitats that meet the understood criteria and that appear to be accessible to existing populations. More research is needed for a better understanding of the Newfoundland population’s habitat preference. Schools of Banded Killifish will stay in the same area for a long time. The smaller fish tend to school in groups of 8 to 12 individuals at the edges of still water where there is abundant riparian vegetation for shelter. Schools of mature fish commonly occur in more open areas at the outflow of streams and brooks. Banded Killifish spawn on plants, to which their eggs adhere. Aquatic plants observed in Banded Killifish habitat in Newfoundland include Purple Bladderwort Utricularia purpurea, Ribbon-leaf Pondweed Potamogeton epihydrus, and Slender Watermilfoil Myriophyllum tenellum.

In Newfoundland, Banded Killifish exhibit spawning behaviour from late June through to the middle of August. When spawning, males undergo a drastic colour change, with the lower portion of the body, including the area around the anal fin, transforming into a brilliant iridescent blue. Males select breeding areas in quiet weedy pools, and defend them vigorously with circling bouts that can lead to a pursued male being forced out of the water. Similarly sized males and females tend to pair off. The female releases eggs that are attached to individual adhesive threads, which adhere to plants. They hang in clusters of 5 to 10 eggs that the male then fertilizes. Evidence indicates that breeding occurs later for the Newfoundland population, and that the females have slightly larger and many more eggs than Banded Killifish that are found in the United States. Small Banded Killifish (from one to two years old) feed on midge (chironomid) larvae, ostracods (small aquatic crustaceans resembling small clams), water fleas (cladocerans), copepods, and some flying insects. Once they are from three to four years old, the larger Banded Killifish swim in smaller schools of three to six individuals. These larger Banded Killifish supplement the above diet with Damselfly and Dragonfly (Odonata) and Mayfly (Ephemoptera) nymphs, as well as molluscs, flatworms (turbellarians), and small crustaceans. Banded Killifish are themselves prey for Atlantic Salmon, Brook Trout, and American Eels, as well as Belted Kingfishers and Common Mergansers.

Vulnerable to any disturbance to the water quality, the principal threat to this species is from the impacts of forestry on the watersheds it occupies. The restricted range of the Newfoundland population of Banded Killifish makes it particularly susceptible to any loss in the quality or quantity of habitat available to it.

The Fisheries Act protects the Newfoundland population of Banded Killifish in Canada. This species is also protected under the Endangered Species Act of Newfoundland and Labrador.

Summary of Progress to Date  Banded Killifish populations surrounding Newfoundland are relatively stable.  Killifish are at risk because the populations are small and are at distances too great to interact with one another. These conditions make range expansion difficult and create sensitivities to catastrophic events and localized disturbances. A management plan has been drafted. In addition, habitat concerns have been taken into consideration in land-use planning. Summary of Research/Monitoring In 2006, researchers examined the bycatch of Banded Killifish in the commercial eel fishery in southwest Newfoundland. They concluded that even though bycatch does occur, animals are generally released alive and not harmed. Mi’kmaq Alsumk Mowimsikik Koqoey Association (MAMKA) has completed surveys identifying additional populations in southwest Newfoundland. Banded Killifish were identified in 21 different locations within the study area. In 2007, MAMKA continued surveys in other parts of the island to improve understanding of the species’ distribution. Summary of Recovery Activities The needs of Banded Killifish were incorporated into the forest harvesting plan for the Indian Bay Watershed. Fisheries and Oceans Canada has created species identification cards for the Newfoundland population of Banded Killifish, which continue to be circulated to key stakeholders and the general public. The development of a factsheet on Banded Killifish will provide information on the general biology, threats, and recovery activities. URLs Government of Newfoundland and Labrador: Environment and Conservation https://www.flr.gov.nl.ca/wildlife/all_species/animals/inland_fish/banded_killifish.html