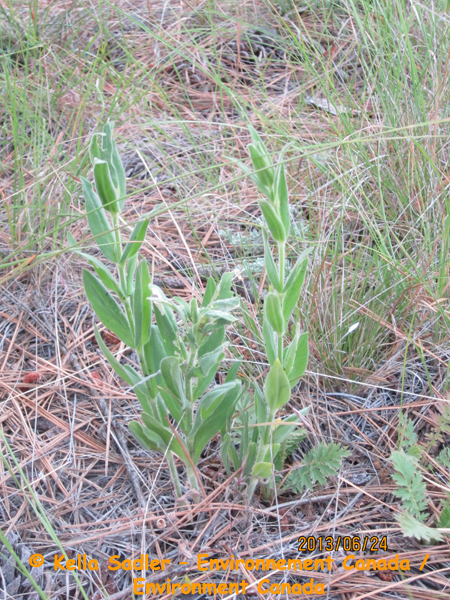 Spalding’s Campion is a perennial with an erect stem base that is 20 to 60 cm tall. Its stems are hairy and branched at the top with four to seven pairs of broadly lance-shaped leaves. The leaves, measuring 6 to 7 cm in length, have no tail and are opposite on the stem. The inflorescence consists of a few to many white flowers in a leafy and usually compact cluster. The fruit consists of an oblong capsule containing light brown seeds. Spalding’s Campion produces dry fruit made up of an elongated capsule with rounded edges containing small light brown seeds.

Spalding’s Campion is found in North America from southeastern British Columbia to neighbouring northwestern Montana and from north-central Idaho into eastern Washington and northeastern Oregon. In Canada, where the species was discovered in the 1980s, Spalding’s Campion is limited to an area of less than 1 km² in the northern part of the rolling Tobacco Plains on a private ranch near Roosville, in British Columbia. In Canada as in the United States, the species only occurs in fragmented patches of its habitat.   In 1995, the Canadian population of Spalding’s Campion consisted of about 100 plants. In 2003, no plants were apparent at the site, probably due to the dormancy characteristics of the species, which is not capable of developing visible stems in a given year. It is therefore not currently possible to assess the population trend due to lack of information.

Spalding’s Campion is found at elevations of between 580 and 1220 m in the Palouse prairie, a habitat characteristic of the bottom of the Rocky Mountain valleys in British Columbia. The species seems to prefer gentle slopes facing north on relatively deep ground. Its populations, associated with several indigenous perennial grasses, extend into the edge of ponderosa pine woodlands. In Canada, its habitat is heavily grazed, as downy brome-grass, an herb introduced to feed livestock, occurs throughout.

Spalding’s Campion is a perennial herb that spends almost half the summer in a dormant condition. Its shoot tips can be seen buried in the ground. In the plant’s first year, rosettes are formed. The first vegetative stems, those that will not carry any flowers, appear the following year. Spalding’s Campion does not have any means of vegetative propagation; therefore, it can only count on its flowers to reproduce. Individuals bloom for the first time around the age of two or three years. In Montana, they bloom in July and produce seeds in August. The seeds germinate in the fall or the next spring. This perennial usually survives for at least five years. This fairly long life allows the populations to persist for many years, despite the sporadic recruitment of new plants.

Historically, loss of habitat has been the primary factor affecting survival of the species. The remaining habitat is being increasingly affected by the invasion of species introduced in the past for grazing. The Canadian population thus grows in a disrupted prairie invaded by these species, with which it competes for nutrients, light and pollinators. In addition, the drought conditions of the last few years most likely increase the stress that Spalding’s Campion is subjected to, which intensifies the other pressures exerted on it. Fire suppression also threatens the species by allowing the growth of young trees and the accumulation of plant litter, which reduces the available habitat.

Team for the Spalding's Campion