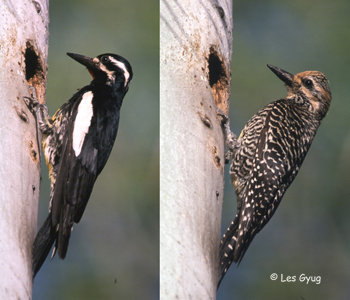 Two subspecies of Sphyrapicus thyroideus are recognized, namely S. t. thyroideus and S. t. nataliae. Since it is virtually impossible to tell them apart from simple physical characteristics, this profile deals with the species overall. Both subspecies are present in Canada.

The Williamson’s Sapsucker is an average-sized woodpecker, its total length ranging from 21 to 25 cm. Unlike other woodpeckers, the male and female have very different plumage. The female’s plumage is mainly brown and black, whereas the male’s plumage is shiny black, with a bold white bar on its wing, a white stripe on its cheek and a smaller one above its eye. It is also distinguishable by its yellow belly and a small red patch on its throat. The female has a brownish head, a black chest and many brown and black bars on its wings, sides and tail. Juveniles resemble the adults, except that the males do not yet have the red patch on their throat and the females do not have the black chest.

The Williamson’s Sapsucker is found mainly in the mountains of western North America, from southern British Columbia to the southern United States and northern Baja California in Mexico. In Canada, the species nests solely in southern British Columbia. Based on known nesting sites, the total population has been divided into five geographically separate populations: four populations of the subspecies thyroideus and one population of the subspecies nataliae. In Canada, the two subspecies occupy completely separate regions. The subspecies thyroideus nests from British Columbia’s Manning Provincial Park, at the Canada–United States border, to the areas around Lytton, Cache Creek and Kamloops to the north, and the drylands of the Okanagan Valley as far as Greenwood to the east. The subspecies nataliae is limited to the far southeast of the province. It is found in the broad valley that cuts through the Rockies to Cranbrook, Kimberley and Whiteswan Lake to the north, and in the Flathead River valley. The total number of Williamson’s Sapsuckers in Canada is probably around 430 breeding adults, only 10 of which are the subspecies nataliae. Since the Williamson’s Sapsucker is relatively rare, the data are insufficient for identifying trends in its Canadian populations. However, it is conceivable that the species is in decline because the environments it can use for habitat are shrinking. In the only region where trends have been identified, namely Oregon, it was estimated that the total number of Williamson’s Sapsuckers declined at an annual rate of 3.3% from 1980 to 2003.

The Williamson’s Sapsucker nests in mountain coniferous forests, at medium or high altitudes. It can also nest in mixed forests, where it often selects trembling aspens for nesting. In British Columbia, the only dense populations of the Williamson’s Sapsucker seem associated with forests of veteran western larch, over 200 years old. In fact, most individuals or nests have been seen in large stands of western larch, or less than 200 m from them, at an altitude of 1000 to 1400 m. A smaller percentage of breeding adults nest in ponderosa pine forests or stands of trembling aspens near ponderosa pine or western larch forests, generally at an altitude of between 800 and 1100 m. Nearly 57% of Williamson’s Sapsucker nests are found in dense forest. And even when the birds place their nests in sparser stands of trees, they are never more than 40 m from a dense forest stand where they go to feed. In the habitat where it breeds, the Williamson’s Sapsucker must find trees in which it can dig holes or that already have cavities where it can place its nest. Its habitat must also provide it with living conifers from which it can draw sap, and other standing trees, alive or dead, from which it can retrieve carpenter ants to eat and feed its young. The old-growth western larch forest that is home to the greatest concentration of Williamson’s Sapsuckers provides all these elements. In particular, the large veteran larches that characterize it bear traces of many fires and are heavily affected by heart rot, providing places where the sapsucker can readily dig its nest. Apparently nowhere else are there other plots of land with western larches that big and that old. This forest appears to be unique.

The Williamson’s Sapsucker is a migratory bird. It is found in Canada only at breeding time, which is mid-March to mid-September. When the males arrive in spring, they start establishing their territory. The females begin to appear one or two weeks later. Formed almost right away, the pairs dig their nests in a tree trunk or standing dead tree, or they settle in an unused cavity. In a season, they have one clutch, which usually contains 4 to 6 eggs. From 26 to 33 days after they are born, the juveniles take their first flight. Very little is known about the breeding success of the species and dispersal of the young. The subspecies thyroideus prefers to make its nest in conifers. In British Columbia, it specifically selects western larches. In the southern Rockies, the subspecies nataliae most often builds its nest in trembling aspens. If there are no aspens with the required qualities, it chooses the ponderosa pine. But if the nest is built in a trembling aspen, the adults feed primarily in nearby conifers. Before the eggs hatch, the Williamson’s Sapsucker feeds primarily on conifer sap. During their time in the nest, the parents and young eat mainly carpenter ants and, occasionally, other insects. In winter, small fruits are added to the menu. In western North America, the Williamson’s Sapsucker is prey to raptors, including the Sharp-shinned Hawk, Cooper’s Hawk and Northern Goshawk. Included among the raiders of this species’ nests are the red squirrel, long-tailed weasel, black bear, snakes and probably the deer mouse and House Wren. There is no information on the breeding success or lifespan of Williamson’s Sapsuckers in Canada.

The Williamson’s Sapsucker is protected under the federal government’s Migratory Birds Convention Act, 1994. This statute prohibits the harming, killing or collecting of eggs, adults and young. The species is also protected by the British Columbia Wildlife Act. The only known nesting site of the subspecies nataliae is in a municipal park in the southeastern part of the province, where it benefits from a certain degree of protection.

Summary of Progress to Date A recovery team for the Williamson’s Sapsucker has been established. COSEWIC assessed the Williamson’s Sapsucker as endangered based on estimates of historic and projected rates of habitat loss and fragmentation from timber harvesting. The Williamson’s Sapsucker’s recovery strategy is being developed. It will provide a framework for recovery through development of recovery goals and objectives, including population, distribution, and research objectives. The recovery team will complete a schedule of studies to identify critical habitat in an upcoming action plan, as sufficient biological information is not available to immediately describe critical habitat. Action planning will take place concurrently with the development of the recovery strategy and will be informed by the emerging recovery framework being developed by the recovery team. Summary of Research/Monitoring Activities From 1995 to the present, the British Columbia Ministry of Environment (BC MoE) has conducted extensive call-playback surveys in potentially suitable habitat throughout a large proportion of range of the sapsucker in Canada. In 2006, BC MoE, with the support of Environment Canada, increased the survey effort and collected vegetation data, which will allow for better characterization of sapsucker habitat. First Nations interviews elders and other knowledgeable advisors on Native reserves to map the potential habitats of the Williamson’s Sapsucker. Summary of Recovery Activities BC Ministry of Environment has added the Williamson’s Sapsucker to the list of Identified Wildlife under the BC Forest and Range Practices Act. This designation permits BC to create Wildlife Habitat Areas (WHAs) on provincial crown land, which are to be managed for the conservation of Identified Wildlife. The actual designation of WHAs for Williamson’s Sapsucker will be a component of the action planning process. Key stakeholders within the forest industry are involved in this initiative. URLs The Birds of North America Online – Species Profilehttp://bna.birds.cornell.edu/BNA/account/Williamsons_Sapsucker/